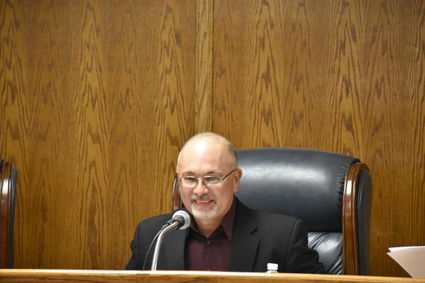 New Mayor Gilbert Alvarado in his seat in the council chambers.

Right after being sworn in to her 10th term on the council, Mayor Cathy Prout was voted out as mayor in a split vote before a packed council chambers on Tuesday.

The November election results were approved at the meeting, and the two council members who won the election were given the oath of office. Prout and Cesar Lopez raised their right hands and swore to serve the city of Shafter faithfully and to the best of their ability.

Councilmember Chad Givens nominated Prout to retain her position of mayor, citing her "excellent record" and the progress that Shafter has made during her tenure in office.

Councilmembers Givens and Prout voted for Prout, but Councilmembers Alvarado, Manual Garcia and Lopez voted for Alvarado to serve the city and council as mayor. The 3-2 count made Alvarado mayor for this term.

The council then selected a mayor pro-tem, who fills in for the mayor when necessary. Councilmember Givens nominated Prout for the position, and newly appointed Mayor Alvarado nominated Cesar Lopez. The newly elected Lopez has no previous experience on the council, so the nomination was somewhat of a surprise, but he won the job, again on the same 3-2 split.

Board representatives and presidents for several committees also appointed. Kern Council of Governments, KernCOG, is an organization that is responsible for developing and updating transportation plans and for allocating the federal and state funds to implement them. While transportation planning is its primary role, Kern COG also brings together mayors, council members and county supervisors to work on regional issues such as air quality and quality of life issues.

Councilmember Prout, who has served as the Shafter representative for the last several years, said, "I would like to keep my place on the Board of KernCOG if it is okay with the Council." Mayor Alvarado said that he was interested in serving on the committee and Councilmember Garcia proposed that both of them could be a part of the committee.

City Manager Scott Hurlbert told the Council that it is a time-consuming position and that with the complex projects and ongoing issues, only one member could attend the meetings and be a part of the committee at one time. Then, for the third time on the night, the majority of Alvarado, Garcia and Lopez overruled Councilmembers Prout and Givens, and Mayor Alvarado was appointed to the post.

In addition, there were several other positions to fill, including appointing chairperson of the Shafter Industrial Development Authority.

This position was filled by Councilmember Garcia, with Councilmember Prout being appointed as vice chair. The Shafter Civic Improvements Corporation will have Councilmember Givens as president. Mayor Pro-Tem Lopez said that he was interested in serving as board member of the Association of California Cities Allied with Public Safety. Lopez will serve on the board, with Prout as first alternate. 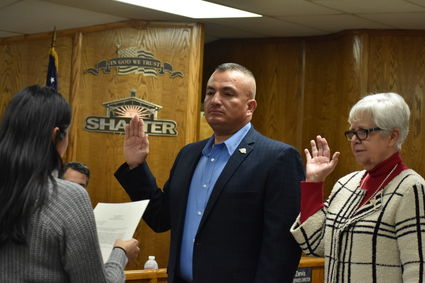 Council members Cesar Lopez and Cathy Prout are sworn in.

The council also approved an extension of time to development a residential project for Tract 6555 for a period of two more years. The tract is located at the southwest corner of Fresno Avenue and North Shafter Avenue, within the city limits of Shafter. The Council also approved Resolution 2631, which was to conduct a public hearing regarding a community development block grant that the city is sending an application in for approval. The grant, for approximately $140,000, is earmarked to be used for improvements on the city's parks.

Phillip Jimenez, district manager of the Recreation and Parks District, spoke during the public hearing, asking if the money would still be used for the improvements on the Shafter Aquatic Center and its pool. Jimenez was told that this was a different grant that they would be applying for, and that the grant that would improve the Aquatic Center had been submitted and should be approved soon.

The grant is being used to resurface the pool and make other improvements to the Center.