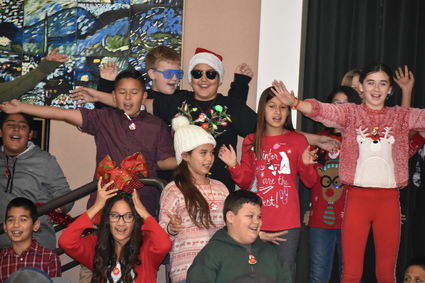 Sequoia Elementary held their annual Christmas program last week with each class entertaining the parents, friends, family and staff with old classics and new hits. The TK and Kindergarten classes showed off the result of all of their hard work with a rendition of "Must Be Santa" and "Me and Santa's Elves." 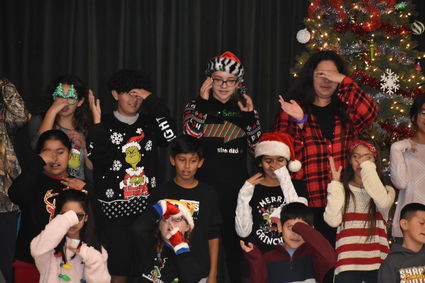 Mrs. Gonzalez and Ms. Pilshaw's classes warning you about that nasty old "Grinch."

With it kind of chilly outside, the second grade classes of Mr. Walker, Alejandro, Bergstrasser, Hughes and Garnett melted the audience's heart with "Mamcita, Donde Esta Santa Claus". Ms. Eyers' and Mrs. Raya's classes used colorful Christmas bells to play "Angels We Have Heard on High". Mrs. Aguilara and Mrs. Torres class ended the morning program with a performance of "Christmas Clap" performed with colorful cups that kept the beat.

Following the younger children, the third-grade students upped the funkiness with a hip-hop version of a Christmas mix of "Up on the Rooftop." Dance moves were on tap when Mrs. Hernandez and Ms. Perez's classes performed their take on "Jingle Bell Rock," with singing and dancing that wowed the crowd. Mrs. Springer's class made their own music with an army of students banging their cups to the rhythm of the beat. Mr. Walton's class gave a warning to kids who are looking forward to Christmas: Be on the lookout for the mean greenie, performing "Mr. Grinch."

The staff and PTO warmed things up by provided hot chocolate to those in attendance.