'China' is in Shafter? 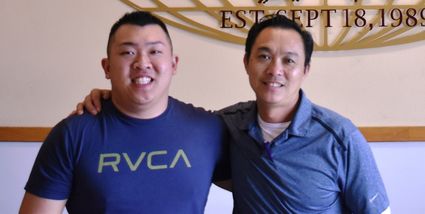 Scotty Dang and his son, Jeffrey, after the lunch rush.

If you ask where you are going to lunch, and someone says, "China," many people will know exactly where you will be spending your lunch hour.

China Cuisine has been serving the community for almost 30 years, with the personal service and great food that has made it a mainstay of downtown Shafter. The décor is bright and has a fish tank that houses their famous huge fish in it, swimming around greeting the customers as they enter the restaurant.

Scotty Dang opened the restaurant in September 1989. He was looking for a business to open, and his real estate agent mentioned that there was a restaurant space in Shafter for sale. Dang didn't know anything about Shafter, but checked it out and decided to take a chance and purchased the property. Formerly Yee's Steakhouse, China Cuisine was born.

"I really fell in love with the people of Shafter, and they became part of our family," Dang said.

He said that it is special to see all of the people coming in who have grown up before his eyes in the restaurant.

"We have had our regulars who have been coming here for over 20 or 30 years. I am serving families now that I served when the mom and dad were little kids."

The restaurant offers a wide variety of items, from egg flower soup and wontons for starters, to egg fu yung, sweet and sour pork, several different kinds of rice, chow mein and chicken.

If you ask a people their favorites at China Cuisine, a lot of the time it isn't even the delicious Chinese food. Many customers are drawn in by the great steaks that the establishment is known for -- from the big rib-eye and tender top sirloin, to the hamburger steak that is smothered in brown gravy and grilled onions.

"Recently, radio station KUZZ had a poll and contest, and we were named the top steak in Kern County!," Dang said.

There is a different special every day, and the majority of the people who dine there know the specials by heart. They have a buffet during lunch time daily, and they also have a dinner buffet on Friday and Saturday nights, including a great variety of food including chicken sticks, sweet and sour pork chunks, steaming fried rice, chow mein and ribs. The menu includes a number of al a carte dishes, as well as combinations including classics like beef and broccoli to spicy favorites such as spicy garlic chicken.

Dang has three waitresses on staff in addition to his family, who all pitch in and help out whenever they can. Dang has a son and daughter: Jeffrey, who is going to college to get his business degree, and Stephanie, who is a teacher at McKinley Elementary School in Bakersfield. "With his degree, maybe my son will be taking over the business," said Dang. Of course, there is also his wife, Joy, who also helps run the restaurant with her own personal service.

There almost was not a business to take over a few years ago. The family was devastated in June 2005 when a fire destroyed the building. Looking at a total rebuild, Scotty's father, who he started the business with, thought it might be better to just retire and not rebuild. "But so many people came to our aid, wanting to do whatever they could, giving me so much encouragement to keep the restaurant -- they were willing to help clean up, do whatever they needed to help us out," said Scotty Dang. "There was such an outpouring of feelings of family that I decided that we would rebuild it. It took us four months, and we reopened in October 2005."

Dang said that the reason he loves Shafter so much is the amazing people – and the main reason they decided to rebuild.

In his spare time, which Dang said is rare, he enjoys going fishing, hunting and spending time with his family. So, the next time you hear someone say, "I'm going to China," you can bet they will not need a passport, just a big appetite for some great food and fellowship.