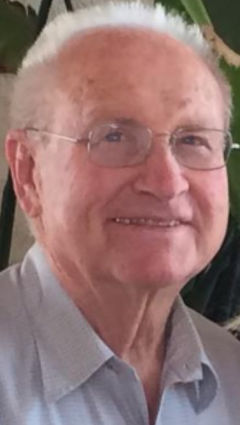 LeRoy Melvin Weidenbach was born Dec. 18, 1931 in Scotland, S.D., to Albert and Emilia Weidenbach. The Weidenbach family moved to Shafter in 1945, beginning the farming operations when LeRoy was 16. After graduating from Shafter High School, LeRoy served his country in the Army from 1952 to 1955.

In 1955, LeRoy joined his two older brothers, Layton and Marvin, on the family farm. He developed a passion and a calling for agriculture that lasted a lifetime. In 1956, he married the love of his life, Barbara Lamas. Together they raised three children, Gary, Alan and Janet. Following the passing of his brothers, LeRoy continued farming with his son Alan until he retired in 2002.

LeRoy loved Christ and had served faithfully in his church as a Sunday school teacher, unlocking and locking the church building and trimming the bushes. He loved spending time with his family and taking them out to dinner often. He anxiously awaited his new body and meeting his Lord and Savior. He went to his eternal home on Jan 10, 2019. He will be dearly missed.