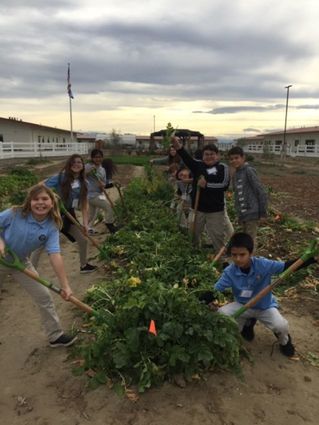 The edible garden is a learning tool for the students.

It was just two years ago that The Shafter Press was reporting that ground had been broken on a new charter school in Shafter. It was going to be a unique school that would give the community another option when it comes to their children's education.

Grimmway Academy of Shafter was opened in August of 2017, and the first year report card is a good one.

Grimmway has helped students with more than their grades on paper. The school provides a choice for families in order to close the gap for students in rural areas of Kern County by creating an environment for students' excellence and well-being. The charter school now enrolls approximately 80 students per grade per year, kindergarten through 5th grade, with an goal of educating approximately 740 students annually in grades K-8.

Grimmway is transforming the educational landscape for students by providing a model of excellence and innovation leading to college-readiness and lifelong success.

Principal Joanna Kendrick has taken on this challenge and has built a team around her that will ensure the success of the students as well as giving them the tools to make them better people.

The school boasts state of the art technology in the classroom, including desktop computers and iPads, and they also teach the students how things work outside of the classroom.

The students learn what it takes to get food from the fields to the table. The school has an edible garden that grows much of what they eat during their lunches. They even grow all of the romaine lettuce that is served at the Tin Cup Coffee House in Shafter. This saved the shop when the trouble with the contamination of romaine lettuce came about, making stores remove all of their lettuce off of the shelves. Tin Cup was not affected because their lettuce was grown locally by Grimmway Academy.

Parents have been raving about the school, praising them for the curriculum, the atmosphere at the school and the unique opportunities that the school provides. "My son has grown in both reading and math, and he loves the extra activities," said Valerie McDonough.

Other parents say that their children have become more self-confident since attending the school, and are learning in a fun way. "My daughter used to hate math, but ever since she started here at Grimmway, she loves and enjoys math," said Veronica Samaniego.

This fun learning atmosphere is also showing results in test scores. Principal Joanna Kendrick and her staff say that there has been an improvement, but they still are not where they want to be, looking to improve them even more each year. They plan to continue the progress they have made and build on it. The students take part in many special events at the school, including this Dias de las Muertos Celebration in October.

It is their belief that parent engagement and education is a big key to success and the relationship between the school, students and parents is a great one. Every event has plenty of parents willing to pitch in and do whatever is needed to make the event a memorable one, Kendrick says. There was a Dias de las Muertas event at the school in October that took a great number of parents, volunteers and staff to make a success. It was one of many where the students learned about tradition while celebrating the holiday.

Home economics is a big draw to the school also, with a number of classes teaching children everything from how to cook a meal to how to mend a torn button. The students at Grimmway learn not only their ABCs, but also what it takes to be a happy, productive citizen outside of the classroom.