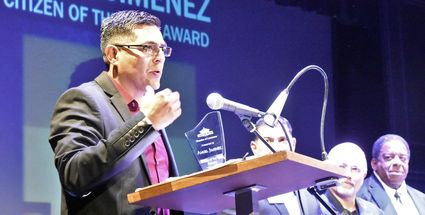 Angel Jimenez received the Citizen of the Year award for his service to the entire community, giving of his time and expertise in providing sound at events throughout the city.

The Shafter Chamber of Commerce held the 71st Annual Community Service Awards Banquet last Thursday night, honoring the businesses and local individuals who have stood out this past year

Nominations were taken in several different categories and winners were named to receive this prestigious award. The event took place on at the Shafter Ford Theater, a new location for the annual event.

Praises were plenty for the move to this location. "This venue is beautiful and the atmosphere is great," said Councilmember Cathy Prout, echoing comments from others attending.

Awards were given out in categories including Commercial Remodel of the Year, which was won by the Delph family and their remodel of the Shafter McDonald's, and Young Person of the Year, given to Marco Rodriguez, a senior at Shafter High School. A packed house was treated to a night of food, fellowship and award presentations.

The event also included a silent auction, with a number of donated packages, including a Shafter Date Night with dinner gift cards, movies and popcorn, to a Vroom Package, which gave the lucky bidder an oil change as well as a basket full of automotive supplies.

The Education awards went to Joanne Carrillo, who has been instrumental in planning and implementing the Dual Language Immersion Program at Golden Oak Elementary School, as well as teaching in the Richland School District for over 30 years.

Receiving the Education Support Staff award was long-time employee and Shafter resident Margaret Ramirez. Ramirez' family is one of the founding families of the La Colonia (Mexican Colony) here in Shafter. Ramirez was recognized for her years of service in the Richland School District.

Darren Williams, a teacher at Grimmway Academy in Shafter, received the special Recycle Award for his outstanding work with the school on their recycling program. The school has a nearly 100 percent recycle rate for their waste. Williams worked closely with American Refuse on a diversion program that saw the school raise their waste recycling level to a very high standard.

On the business side, the Agriculture Award was given to South Valley Farms, which has made Shafter its home and has flourished here, giving the area local products as well as jobs.

Matthew Delph accepted the award for Commercial Remodel on behalf of his family, who completed a remodel that saw the McDonalds location expand their site by over 1,500 square feet. The project included a new double drive-thru, spaces reserved for those ordering online for pickup, as well as kiosks inside that allows customers to order and pay for their food without waiting in line. They also employ a local work force that gives the business a small-town feel without compromising on customer service and product quality.

Corporate Citizen of the Year went to CRC, the California Resources Corporation, for its tireless work in community involvement and projects that enrich the lives of residents and children. Among the projects they are involved are programs to help veterans, such as sponsoring Honor Flight of Kern County, schools, with several events collecting coats, school supplies and other essentials for the youth in our area, and being partners in several Boys and Girls Clubs throughout the state.

Grimmway Academy was honored with the Innovative Education Award for with their techniques and programs that were implemented to teach students not only the three Rs, but also classes in recycling, music and other skills that students will need as they continue on in their classroom careers as well as their daily lives. 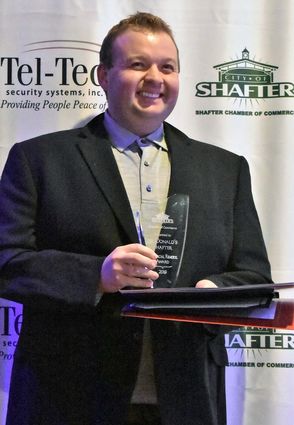 Matthew Delph accepts the award for the Best Commercial Remodel for the renovation on the McDonald's in Shafter.

Among their new programs, an edible garden was created in which the students have hands-on experience in growing some of the food that will make to their lunches, as well as teaching them how food makes it from the field to the table.

Grimmway Academy Chief Executive Officer Paul Escala accepted the award on the school's behalf, thanking the community for their acceptance and support. "It is strange to think that we were in this same venue, not even two years ago, planning and meeting with prospective parents, telling them how we would be able to enrich their children's lives and be a viable option for their student's education careers," said Escala. "It has been an honor and a privilege to be a part of this partnership, and hope this is just the beginning of a long and beautiful relationship between our school and the wonderful community of Shafter."