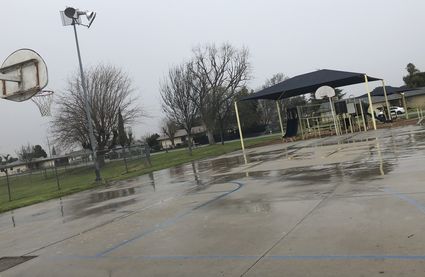 The basketball courts at Rodriguez Park.

A change in leadership for the city has led to a refocusing on opportunities afforded youth and facilities the city has available for them to keep active. Steps have been taken to look at the current inventory of facilities and programs Shafter has and planning for the future.

At a recent City Council meeting, Mayor Pro-Tem Cesar Lopez commented that the city is lacking when it comes to sports facilities Shafter has available, including having an insufficient number of basketball courts.

"In the entire city of Shafter, we have only one park that has basketball courts that can be used by the public," Lopez observed.

Rodriguez Park, where basketball courts are in need of some repair and refurbishing, is the lone park with courts. The majority of the schools, including Shafter High, have outdoor basketball courts, but their facilities are fenced and not open to the public.

The city has six parks within its city limits. There is Mannel Park, located on Mannel Avenue and Tulare Avenue. It is one of the county's oldest recreational parks.

Mannel Park is also the site of a exercise stations, including new exercise equipment that was installed along the walking path around the park. Residents can walk the route and stop along the way to exercise at the different stations. This project was made possible by the partnership of the City of Shafter and the Shafter Woman's Club. The project was the brainchild of the Woman's Club, which did the bulk of the leg work.

The newest park is Veterans Park, located at the intersection of Schnaidt Street and Los Angeles Avenue. This park features open fields, a football field with goal posts, soccer fields, a new playground area, picnic tables and a splash park.

Public Works Director Michael James has been studying the feasibility of adding additional basketball courts in Shafter. James said his department has a plan in place that will refurbish the existing courts at Rodriguez Park. This would include painting, resurfacing and updating the lighting.

James also brought up the possibility of adding courts to Mannel Park, explaining more research needs to be done to determine the feasibility and cost of the project. The project would include courts, backboards, rims, painted surfaces and lighting. Mayor Alvarado asked about the possibility of also adding a tennis court to the location.

"It is a possibility and an option, but we have to consider that each individual sport would need its own specific dimensions and fencing," James responded. "For example, a tennis court needs a fence around the court area, instead of just the need for space around the perimeter of a basketball court

In addition to the school teams and the Shafter Recreation

Department leagues, Shafter boasts a number of local competitive traveling teams, including teams in basketball, softball and baseball. But additional recreational options are needed, according to Mayor Pro-Tem Lopez.

"We have a need here in Shafter for more places for our kids to participate in an activity," he said. "We have to supply them with an outlet to give them the exercise, physical, and mental well-being that they deserve."