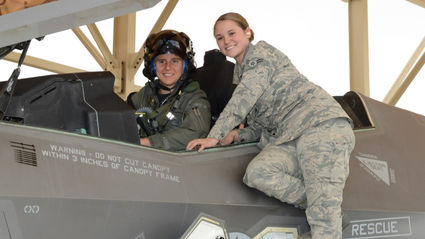 The Minter Field Air Museum always has a prominent guest speaker for their annual Founders Day Banquet, and this year is no exception. History-making test pilot Rachael Winiecki will be the featured speaker at this year's event to be held next month.

This past December, Winiecki became the first female pilot to complete an F-35 test mission. Adding to the historic ground-breaking event was the fact that there was a female crew chief, Airman First Class Heather Rice.

In a press release Winiecki stated, "I may be the first female developmental test pilot (in the F-35), but (test pilots) are just one small part of the test enterprise." She then spoke of the increasing numbers of women working in the field as directors, engineers, maintenance workers and in other support functions.

Winiecki, part of the 461st Flight Test Squadron, has also flown A-10 and F-16 aircrafts. She graduated from the U.S. Air Force Test Pilot School at Edwards Air Force Base.

Ronald Pierce of the Minter Field Air Museum said that Major Winiecki is a pioneer in test flight history and they are honored to have her as their featured speaker.

The Founders Day Banquet will be held on Friday, March 1, at Hodel's on Knudsen Drive in Bakersfield. Doors open at 5:30 p.m. and dinner will start at 6:45 p.m.