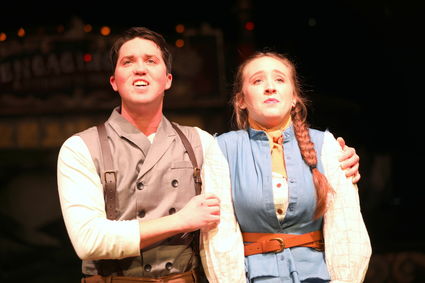 Adam and Faith are best friends, played by Brent Starrh and Ashleigh Janzen.

The Shafter Colours Festival kicked off on Thursday night with a successful Spaghetti Dinner put on by the Shafter Community Chest and the debut of Larry Starrh's newest production "Engaging Adam".

The play was a venture into new territory for Starrh, delving into the world of intrigue, suspense, as well as hilarity. Brent Starrh portrayed the lead character, Adam, a young wealthy bachelor who decides that it is time for him to settle down and find a wife to start a family. His best friend, Faith, played by Ashleigh Janzen, doesn't think he is ready to take this step, warning him to be careful before making that leap.

Baron and Lady La Croix are determined to get what they think is their fair share, devising a plan to marry one of the daughters off to the young Adam.

The sisters are played by Bethaney Rowley, who portrays each sister in such a different character that she is unrecognizable in most cases. Adam meets each sister, one by one, for a date, trying to get to know her and see if they are right for each other. Rowley's Lacy is lazy to a fault, wanting to get Adam to let the day go, napping in between short conversations. After each date, Adam would tell Faith how the date went, giving her his impression on each sister. Getting frustrated by his search, not meeting the girl of his dreams, Adam tried one final sister.

This sister, Mimi, is a devious girl who knows how to get what she wants and what to do and say to get it. She mesmerizes Adam, nudging him into believing he is the king of the valley, superior to his subjects. They were soon engaged, to the dismay of Faith. The music and songs were plentiful and entertaining.

The Baron and Lady La Croix got Mimi to have Adam sign the deed of Adam's fortune to her parents. Adam was devastated by his actions once he realized what he had done. With the help of Faith, his other friend Page, played by Leslie Aldridge Wilson, Adam was rescued by the Duke, who is the owner, unbeknownst to Adam, of the entire valley. A great lesson was learned by Adam, showing him how each decision that is made has consequences. Baron and Lady La Croix are played by Bob Anderson and Brenda Baldwin, and they were at once frightening, charming and diabolical as they planned Adam's demise.