Gen. Shafter gets his due 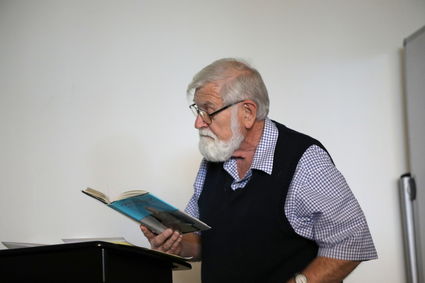 A packed house was at the Shafter Learning Center on Saturday to hear Stan Wilson give a presentation on the town's namesake, Gen. William R. Shafter.

As part of the Shafter Colours Festival, each year an author gives a presentation that informs the attendees about their works. Wilson is the curator of the Shafter Depot Museum and has written many pieces about the city's history that have been published in the Historical Society's newsletters.

Wilson prepared his presentation using a book documenting the life of Shafter written by Paul Carlson. Wilson also has given several presentations, including an informative session on the Dust Bowl era, which was also at the Shafter Learning Center.

Wilson said that Shafter was a Civil War veteran who was commissioned in the regular Army after the war as a lieutenant colonel. He spent 15 years leading the Colored Infantry as they sought to protect West Texas from Indians and Mexican and American bandits. Colonel Shafter was then transferred to Angel Island in San Francisco Bay. "Shafter was then promoted to brigadier general and given command of the Presidio at San Francisco.," Wilson added.

Shafter was then promoted to major general when the Spanish American War was declared, being selected to lead the invasion force. This decision was made in spite of the fact that Shafter was 63 years old at the time, weighed over 300 pounds and suffered from gout. "It is believed that one reason for his selection might have been his lack of political ambitions," Wilson commented,

Shafter forced the surrender of the Spanish at Santiago, Cuba, in a short time and became a national hero. Wilson said that Shafter retired to a farm south of Bakersfield, next to the ranch of his son-in-law, William McKittrick in 1901. He died in 1906.

A siding on the San Francisco and San Joaquin Valley Railroad was named in his honor in 1898. That siding was later to become the town of Shafter.