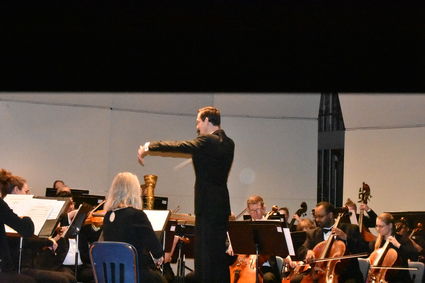 Conductor Stephen Penner leads the orchestra to a crescendo.

The Fred Starrh Performing Arts Center at Shafter High School was packed on Friday morning, full of fourth- to sixth-grade students from all around the area as they listened to the music of the Shafter Symphony Orchestra. Led by conductor Stephen Penner, the ensemble introduced the students to a kind of music the majority had never had the chance to hear.

The asymphony is a group of local musicians who gather several times a year to practice and then perform at different venues. This time, they were preparing for their performance at the Shafter Colours Festival. The symphony is able to put on these shows for the school children in big part thanks to a grant that was received from the Kern Arts Council.

This year, the Shafter Symphony celebrated the silver screen with several pieces from famous movies. All of the school districts that had students attend this year for this special event do not have orchestra programs at their respective schools. With that, concerts such as these might be the only exposure they get to classical music.

With the students waiting quietly for the concert to begin, not knowing what to expect, the faces lit up on the students as the familiar opening stanzas of the "Star Wars" theme was played. The kids did not expect to know any of the songs that were going to be played, but most recognized almost all of the pieces played at this concert. 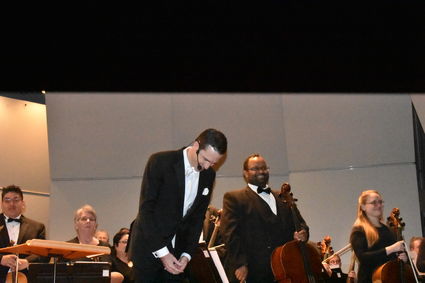 After the Star Wars theme, conductor Penner introduced all of the instruments and showed an example of what the different instruments sound like. One by one, the sections played a few bars, showing the students how each one produces sounds differently.

After the demonstration, an ominous three notes played from the bass section. Kids recognized it as the start of the "Jaws" theme. The entire orchestra played their part, making the song build to a dramatic conclusion.

There were two separate groups on Friday morning, with a total of 1,500 students in attendance to listen to the symphony. The symphony followed up the two performances with a sold-out performance at the same venue on Saturday night as part of the Colours Festival.