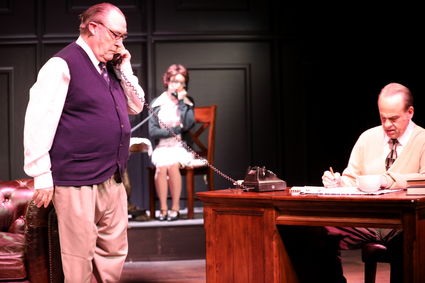 Dvid Payne as C.S. Lewis. and the role of Warney was played by Gregory Welsch.

The Shafter Colours Festival concluded with a performance by David Payne and company, documenting a challenging time in the lives of famed author C.S. Lewis and his wife Joy. The play, "Weep For Joy," chronicles the time Lewis had with his wife Joy after she was struck with the news that she had terminal cancer.

Payne brought the author to life during the Ford Theater production with a spot-on characterization, giving the audience a glimpse of what it would have been like back when Lewis was at his height of notoriety.

Jordan Scott portrayed American writer Joy Scott, who began a friendship with Lewis that blossomed into love and eventual marriage. They were from different worlds, but a kinship sparked, which turned into lively debates, some humor and a differing of opinions. Friendship soon turned into love and marriage filled with joy, not least because of they were united in their Christian faith.

That faith was tested when Joy was struck with the disease, plunging them both into an uncertain future. Lewis had to face life without his Joy, literal and figurative, and Joy had to face a premature death, leaving her love alone in the world. The play was filled with laughter, even in the bleakest times, as well as plenty of tears, as the couple come to terms with situation, using their profound faith, as they draw on their loving God for strength and joy even in the trying times that they were facing. 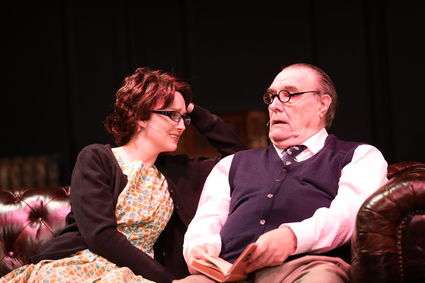 David Payne as C.S. Lewis with his wife, played by Jordan Scott.

David Payne was a young man who had not acted before in 1966 when he auditioned for a small part in a play in Nashville. To everyone's astonishment, including his own, Payne was cast as the author C.S. Lewis. After receiving acclaim for his portrayal, Payne wrote "An Evening with C.S. Lewis."

Payne used the questions that people had asked him about the author to help pen the production. Payne thought, "Wouldn't it be great if people could spend an evening with the author and hear the thoughts from the author himself. That is why I decided to write the play."

Payne has now written and starred in more works involving the famous author, one of them being "Weep for Joy," as well as "Lewis and Tolkien on Stage." This piece documents the friendship and meetings that took place between Lewis and famous JRR Tolkien, the author of the Lord of the Rings trilogy. They were both opinionated and stubborn, and their meetings were filled with lively debates and humor, and ultimately a friendship bloomed that would last until their deaths.