Leprechaun leaves a pot of gold 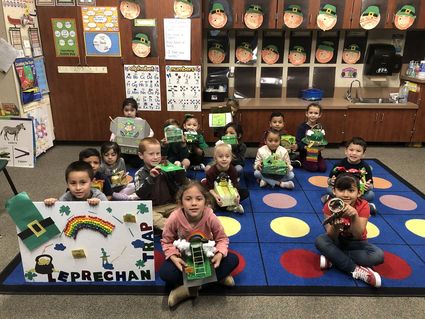 A classroom at Sequoia Elementary School was visited by a little leprechaun last week as St. Patrick's Day approached. Mrs. Hinks' T-K class was the site of a break-in, and the suspect was about 2 feet tall, wearing a big hat, shiny black shoes and a green suit.

The students would come into school in the morning, and there would be desks and chairs moved. They also noticed when they came back from recess or lunch, there would be marbles or toys scattered in the floor. Knowing that the classroom was tidy when they left, the students knew the culprit had to have been the mischievous little guy.

Their teacher said that the leprechaun had been known to visit her class when it came close to St. Patrick's Day. She said that they would have to make some "leprechaun catchers" to try and capture him put an end to the mischief. "I told the children that we might be able to catch him this year, so we made a lot of traps, trying to lure him into their catchers," said Hinks.

The students had a lot of fun making their very own traps. They ranged from boxes with tissue paper inside and glitter on the outside to a trap that consisted of a poster board with a rainbow on it with a pot of gold at the end.

The room was aglow with green glittering boxes, waiting for the suspect. "We have to have the catchers in the classroom by Thursday so we can set the traps so we might catch him on Thursday night, " Hinks said.

Well, the students brought their traps into class on Thursday, ready to catch the little guy if he dared to visit. One student didn't want to stop there. Faith Givens was ready to spend the night in the classroom on Thursday night, but, according to Hinks, Faith's mother had other ideas.

"We put out some stuff at home and when we got up, he had eaten all of our chocolate coins," Faith said,

When they returned to class on Friday morning, there was a basket with a letter in it. Hinks read the letter to the class. It read: "Hi kids, you thought that you guys were tricky with your traps, trying to catch me. But, you guys aren't quite as tricky as me. But, I loved your traps, they were awesome! To show you how much I liked the catchers, I left you guys a basket full of gold chocolate coins. I know I will be seeing you guys again!"

The children ate the candy after they cleaned up the mess that Tiny Tommy the Leprechaun had made. The children were happy that he liked their traps and are looking forward to another chance to catch him. They said that it will be even more fun next time they try to get him.