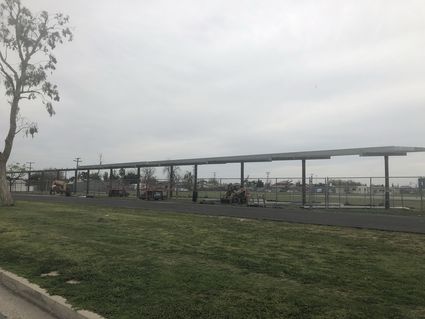 The Richland School District will be self-sustainable when it comes to energy once projects now underway are completed by the summer's end, says Martin Rodriguez, chief business officer and project manager for the district.

At Richland Junior High, Solartec, Inc., is beginning to install solar panels that will provide the power needed to operate Richland Junior High and Redwood Elementary Schools. "It will take between four to six weeks for the project to be completed," Rodriguez said. "After it is finished, the schools will be self-sufficient, generating enough electricity to power both schools."

This project is the first phase of a plan that will see all of the schools in the district have solar panels installed on site. After the Richland/Redwood project is finished, Sequoia Elementary School will come next. Two sets of solar panels will be installed on the property, where the parking lot is at right now.

At Richland, the panels are being installed in the south end of the play fields at the intersection of Atlantic Avenue and Golden West Avenue. The area will be protected by fencing, inaccessible to students or the public. Golden Oak will come next, making the entire school district to become energy self-sufficient.

According to Rodriguez, the Richland, Redwood, Golden Oak and one of the Sequoia projects are the result of the Joint Powers Agreement between the school district and the City of Shafter. This agreement provides funds for the schools to have renewable energy systems to be installed, helping to eliminate dependence on utility companies.

The remaining project that is going in at Sequoia Elementary School is the result of funds provided by Proposition 39. "Prop 39 provided funds for all schools for projects that will result in the use of renewable energy sources for power," explained Rodriguez. "We had enough money remaining from the fund to pay for this project." Golden State Power is complete this project, installing solar panels. "This project came in at about $305,000 for the entire project, which is actually $40,000 lower than our estimated budget," Rodriguez said.

The projects mean a savings for all of the schools in their utility expenses.

A main focus has been on making area schools more environmentally conscious and sustainable. American Refuse has been working with local schools when it comes to reducing waste that is generated by the schools, helping the schools divert the majority of their waste to different recycling facilities, cutting the amount that ends up in the local landfill.

Cities soon will be penalized and fined by the state for noncompliance in reducing their waste to an approved amount, and Richland's stated goal is to beat these deadlines and create a greener and cleaner environment for its students.