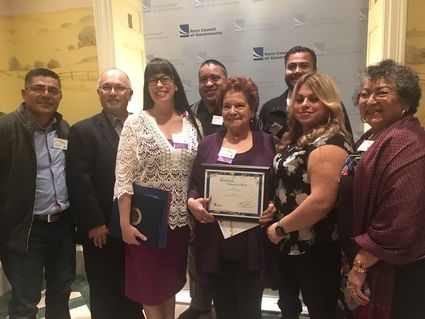 At their annual awards banquet, KernCOG honored members of the committee for their outstanding contributions to the Shafter community. The committee received a plaque honoring the group for their achievements at the Seven Oaks Country Club in Bakersfield on March 7.

Established in 1991, the Shafter Cinco de Mayo Festival began with Albert "Roy" Root and Deanna Rodriguez-Root. Their mission was to bring the community of Shafter together through cultural celebration and to commemorate the Mexican Army's victory over the French Empire at the Battle of Puebla in 1862.

The Cinco de Mayo committee works very hard to raise the required funds to finance the event every year. "Our businesses and individuals have graciously sponsored the festival over the years, which has allowed the event to deliver a quality event," Rodriguez-Root said.

The committee also has been able to award scholarships to deserving students of Shafter High School, as well as helping nonprofit youth organizations in the community.

Sixteen years after the launch, Albert passed away. He was very well known in the Shafter community, and gave much of his time volunteering with several different organizations. After his passing, their daughter Brandi stepped in to help her mother continue the festival in his memory. For the past 27 years, the festival has drawn a crowd that grows bigger every year. People from all over Kern County and the San Joaquin Valley, and as far away as Los Angeles and Phoenix, participate in the festival. "A lot of family members that have moved away use the festival as a sort of family reunion as they come back to town to attend the event and see family members and friends," Rodriguez-Root said.

The event kicks off with a parade downtown and continues with festivities afterward at Mannel Park. Activities include a variety of food, games for the kids, rides, vendors and music, and dancing by the local Ballet Folklorico groups directed by Rodriguez-Root. Deanna and Brandi say that it takes many volunteers to make the event a success, and they are fortunate to have a great bunch of people who help put this on every year.

This year, the event will take place on Saturday, May 4, with the parade starting at 10 a.m. According to Brandi, the event will have over 50 entries in the parade and a park full of activities that will keep the entire family busy.