Owen is wearing his medal in front of his project.

Owen, a Shafter resident, qualified for the County Science Fair by winning at the local level, placing first in the 5th Grade Earth Science category.

Owen's project dealt with the subject of recharging soil. In his project, Owen tested several different types of soil to see which one would be best for recharging a groundwater aquifier. According to Owen, his decision to do his project on this subject is thanks in part to his grandfather, who is long-time farmer Wes Selvidge. Selvidge served for many years as a board member and president of the Rosedale Rio Bravo Water Storage District.

Owen's mother, Andrea Weishaar, said that Owen has always loved dirt and his grandpa, so it was a perfect fit. "I have always loved playing around in the dirt, so I got to do what I like to do and learn a lot, too," he said.

Owen was talking to his grandfather about the subject of groundwater for his project, and the idea came of testing different soils, seeing which ones would be best to recharge the groundwater. "One of the ponds out where I tested is even named after my grandpa," Owen said, referring to the Wes Selvidge Groundwater Banking Facility.

Owen said that he worked for almost four months on the research, testing and conclusions for the project. He said that he had to test several types of soil, determining how much water percolated through the soil and how fast it percolated. 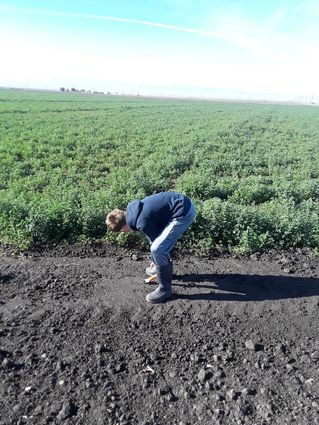 Owen had to test several different types of soil.

Over 600 students competed at the county level, vying for awards in several different categories. Owen said that he had a lot of fun doing the project and is looking forward to competing again next year. For students sixth grade through eighth grade, the top placers qualify to compete at the State Science Fair. For fifth graders, the county level is the final competition.

Owen said that the entire process has helped him in more ways than just learning about soil. He said that it also helped him with public speaking.

We had to be interviewed and they asked us questions about our projects so we had to be ready to explain our testing process and also about our conclusions. It really helped me learn to speak in front of a lot of people," Owen said.

His mother said that it has been a great experience for Owen and the whole family. "It was kind of neat to see how Owen made a great project that started with a talk with his grandpa and his love for playing in the dirt."