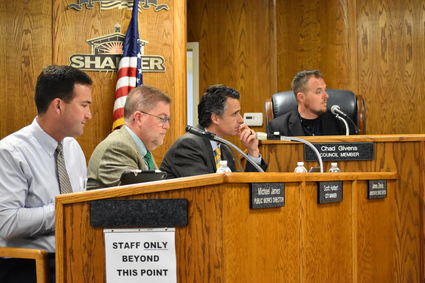 The City Council agreed to use up to $1.4 million to purchase land for the Southeast Shafter Sewer Project, connecting the community of Gossamer Grove to a main line running to the Wonderful Industrial Park.

This project is completely different than the one that is going to extend sewage services to the unincorporated sections of Shafter. Currently, the residents of Gossamer Grove have their sewage waste going to a line that goes to the North of the River Water Storage District.

This is a “friendly agreement” between the city and North of the River that allows the community to use their service, but the city has to find its own place to take their waste to by 2027 or when the community has filled up the allotted amount of waste that is to be pumped.

The city is getting the project under way because, according to Lennar Homes, developers of Gossamer Grove, that limit could be hit by the end of this year.

The city approved a total of $1.37 million for land acquisition for the project, with up to $515,000 for the purchase of land that will carry the line on its way to the Wonderful Industrial Park. Two parcels will be purchased for an amount of approximately $490,000. One parcel is owned by the Wonderful Company. That land has a purchase price of $115,000. The other land is owned by Bidart Brothers and has a price of $380,000.

The price includes compensation for the loss of four rows of grapes that would have generated revenue.

The sewer line will go from Gossamer Grove to the Wonderful Industrial Park, where it will meet with the main line. From there, the waste goes to a city facility on Seventh Standard Road.

In other agenda items, the city approved an ordinance that recognizes the implementation of new regulations regarding disposal of waste generated by commercial and multifamily dwellings, as well as single family homes.

It was decided that all commercial and multifamily dwellings shall come into line regarding the disposal of waste generated. The waste must be separated and all organic material will be picked up and hauled to a recycling facility. Failure to comply will result in a $100 fine for the first violation. The second violation will incur a $200 fine and every violation after that would be a $500 fine for each following offense.

There also is language in the ordinance regarding single-family homes. In the future, all residents will have separate cans for solid waste, green waste and recyclable materials. Currently, separation is on a voluntary basis, but according to City Manager Scott Hurlbert, there will eventually be laws that will make it mandatory for all residents to properly dispose of their waste.

CalRecycle, the state agency overseeing the recycling programs, will monitor how well cities do in meeting the guidelines. When it comes to implementation, in the future, the city can be fined for not meeting required percentages certain percentage of waste that is being diverted to facilities other than a landfill.

“It is coming, but before anything happens when it comes to single-family dwellings, there will be plenty of outreach, notices and education given to the residents, preparing them for the changes,” Hurlbert said.

The council also approved an exemption for veterans from city facilities and use permit fees. Anyone interested in using the park facilities must pay an application fee, but soon veterans who apply for a permit will get it for free. For example, there will be no charge for veterans who would like to use the Shafter Veterans Hall for a meeting or event.