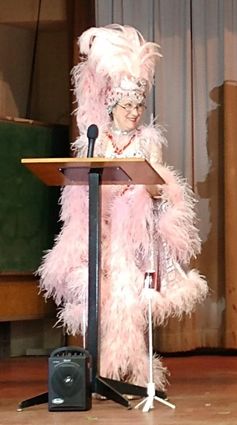 Fashion and more fashion was the name of the game on Saturday afternoon as the Shafter Woman's Club held a fundraiser for the Heifer Project, one of the many projects the club sponsors.

According to Heifer International and The General Federation of Women's Clubs, both share the goal to make life better for neighbors by providing nutritious packaged milk to be given to students in other countries in order to help them focus on learning instead of hunger. Many women's clubs have the Heifer Project as one of their annual fundraisers.

In addition to the fundraising, the club presented a fashion show with beaded dresses and feathered headpieces from the 1930s and the 1940s, and all of the gowns were donated to the show by Kristina Steinke. "The emcee, Kristina Steinke, was a showgirl for 20 years performing in Las Vegas," said club member Phyllis Neufeld. "She traveled all over the U.S. and the world."

Neufeld added that Steinke currently lives in Bakersfield and her artistic talent is displayed in many murals around town. "She painted the first 17 inductees to the Bakersfield Music Hall of Fame, located at 2230 Q Street."

"I wore many of these costumes in my shows," Steinke said. "I also had some special made for me by copying those I liked from old movies." For example, Steinke stated that model Nina Ha was wearing a costume Steinke had made to replicate one Mae West wore in one of her performances.

Additionally, each individual table was decorated by a club member. In particular, one of the tables had a black and white theme, utilizing a checked pattern in its decor, which was reminiscent of the colors in Alice in Wonderland. Another table had a seafoam green theme with seashell place settings that looked like a summertime brunch was happening.

The Shafter Wasco Woman's Club has several different projects they sponsor. For membership information, contact the Woman's Club located at 309 California Ave., Shafter, or call at 661-431-6744.