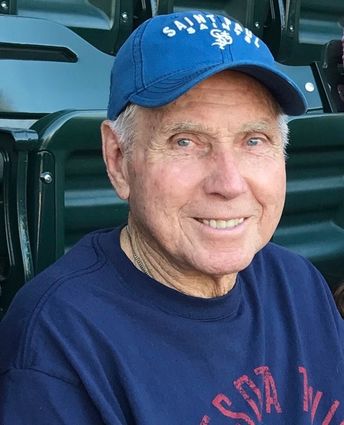 Surrounded by family, David Anderson died at the Hoffmann Hospice House on Saturday, April 6, 2019 in Bakersfield at the age of 89.

Dave was born on Nov. 22, 1929 in Bakersfield to Martin and Lucy Anderson. He graduated from Shafter High School and married Mary Frances Ohanneson of Shafter on June 20, 1951. He was drafted into the Army and was commissioned 2nd Lieutenant in May, 1952. He served in the 124th Ordinance Battalion of the 3rd Armored Division in Germany. As a Korean War veteran, he was invited to travel to Washington, D.C. on an Honor Flight in the company of his son Michael in 2016. Professionally, Dave drove a bus, pumped gas, packed groceries, fixed cars, farmed, owned an auto parts store and two sporting goods stores. When he retired in 1993, he became a painter, carpenter, landscaper, roofer and one-man tree service.

Dave loved his community. He was a president of the Shafter 20-30 Club, a Sub-District Governor, and a president of the Kern County Farm Bureau. He served on the County Committee on School Organization and the Board of Trustees for the Richland School District. He was a senior warden and treasurer for St. Mark's Episcopal Church and one of three trustees on the Kern County Cemetery District Board for Shafter and Wasco. In 1994, he received the Shafter Chamber of Commerce community service award. He also loved to cook and serve drinks at the Historic Green Hotel.

Dave was a sharp card player, an avid backpacker and an outstanding athlete until the end of his life. He was a captain and outstanding player on the Shafter High School basketball and baseball teams and played basketball for Bakersfield College. He received a silver glove in the Golden Glove boxing program. He managed the Shafter Merchants baseball team and served as a president, treasurer and coach for both the junior and senior Babe Ruth leagues. He worked tirelessly to enhance Kirschmann Park and directed various district and state baseball tournaments. He served as volunteer, coach, manager, sponsor, organizer and groundskeeper for Shafter youth baseball programs for 41 years.

Dave played basketball with multiple generations well into his 80s. One life highlight was playing in a state basketball tournament which required each team to have a player over 55 -- Dave was 68. He touched the lives of so many across generations and communities. He will be missed.

Dave is survived by his wife, Mary (Bebe); his twin sister, Virginia (Sis); his children, Kathleen and her husband, Robert, Michael and his wife, Carole, Jennifer and her husband, Mike; his grandchildren, Leslie, Joe, Nathan, Krissy, Kayley, Bill and Katie; his great-grandchildren, Emily, Andy, Mica, Sidney, Connor, Colton and Maddie; his great-great grandchildren, Mason and Braydon; and numerous nieces and nephews. He is preceded in death by his daughter Julie and his brothers, Elmer and Don. A memorial service will be held at 11 a.m. on Saturday, April 13 at the Congregational Church in Shafter. In lieu of flowers, please consider a donation to the Dave Anderson Athletic Scholarship Fund. Donation information will be announced via social media.