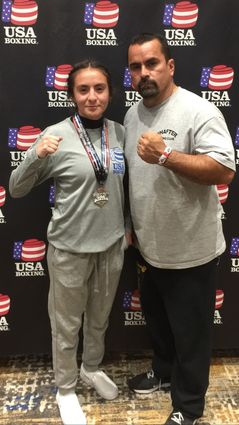 The Shafter Boxing Club, well-known for its ability to churn out champions, showing that there will not be any slowing down in the near future.

The club has built a very strong reputation for its skill levels. The club participated in one of the most sought-after titles in the country for an amateur. The coaches took several members of the club to the tournament, which was a tournament for the Olympic Committee. The U.S. Olympic Committee even sent a letter for the kids to their schools, asking them to be excused for their time off when they traveled for the competition. The club has been winning on the state and national level for a few years now and they are now stepping into the realm of Olympic style Boxing.

The Shafter Boxing Club, led by Coach Mike Ayon, his brother Tony, sister, and a large group of coaches and volunteers, have built a solid reputation in the boxing world. Flying under the radar for a few years, it is no longer possible because of the excellence that has come out of the club, which started as a grass roots operation.

Years ago, Mike Ayon was looking for a way to help local kids get in shape and stay off of the streets. Ayon started the boxing club at his house, using his yard and garage to hold practice and sparring sessions, training the kids after school and on weekends.

As the boxers progressed, they entered tournaments, and the journey began. This effort resulted in titles at the local level to begin with, followed by wins on the regional, state and national level. The club boasts over 10 national titles to its credit, and the club has grown in numbers and stature. Thanks to efforts by former Assemblymember Rudy Salas and local businesses, the club acquired a facility on Lerdo Highway that now serves as their home gym.

This tournament will qualify the first- and second-place winners to the Olympic trials to be held later this year. 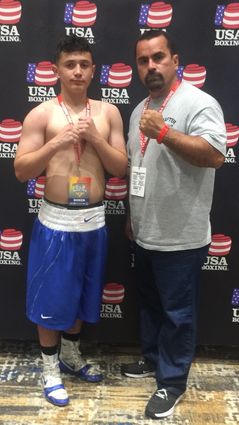 Javen Encinas, who holds several national titles, made it to the semifinals in Reno.

The Shafter contingent had a great tourney. The Shafter boxers came home with two golds and a silver in their respective weight divisions. In the Youth Female division, Madeline Martinez came home with a gold medal. Also winning gold was Natalie Munoz, who took the title in the Junior Female Division. Brandy Ortega came back with a silver medal for her second place finish.

Three boxers from Shafter who also made the trip are previous national and state champions who made it to the semifinals of their divisions. Javen Encinas, who has five national titles to his credit, lost his semifinal bout. Also competing and reaching the semifinals were Eduardo Rodriguez and Jose Ibarra.

Coach Ayon said that he is proud of his kids and the job that they do, not only in competition, but during training and away from the ring. "I am so proud, one of my boxers has grown up and is now becoming a deputy with the [Kern County] Sheriff's Department," said Ayon. "I think this club is special, with so many talented kids who work hard and put our little city on the boxing world map."