8 dogs get new homes at event 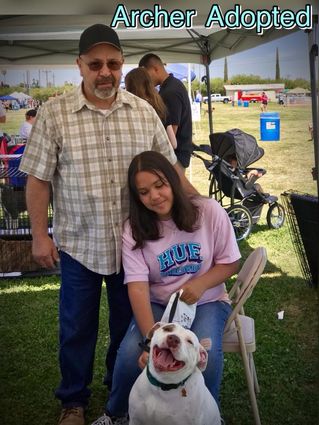 Archer, a long-time resident at the shelter, was adopted at the Mega Adoption event.

The event saw a number of agencies from throughout Kern County come together, making the fairgrounds a one-stop-shop for those prospective pet owners and also for those who already own pets. The event is put on by the Make Kern No-Kill Coalition, which is an alliance of 15 different shelters and rescue groups in Kern County. The event showcases some of the longer-tenured animals at the shelters, trying to find them homes. The number of animals that were available this year numbered almost 100.

Nick Riddick, animal control manager for the Shafter Police Department, said that Shafter brought 11 dogs this year, of which eight were adopted out. All of the dogs brought to the event were long-term residents of the shelter, giving them a spotlight to shine in, helping them find that forever home.

"This is a great event, especially for a small shelter like ours," said Riddick. "We have limited space and don't have high amounts of adoptions such as some larger shelters.

Of the animals that were adopted from Shafter, the majority of the larger dogs still remained. Riddick said that a lot of times, the small, cute dogs tend to go first. This is a great opportunity to showcase larger-breed dogs and show that they have a need for being adopted. 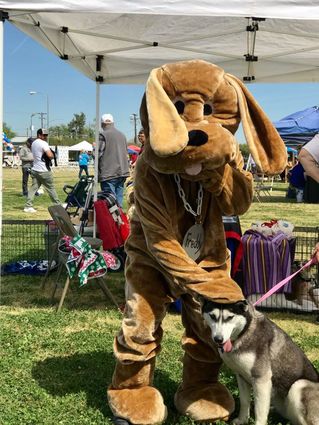 Yana gets a pet from the event mascot. Yana was later adopted and started a new adventure.

Riddick added that some people have a misconception when it comes to owning a larger dog, like the higher cost for food and maintaining the animal. "A lot of the animals we brought we have had at the shelter for some time, and we wanted to give these dogs a fair chance to get exposure that is needed to find them that home that they need."

In addition to the adoptions, there were also fun things for owners and their animals to do. Pets got to enjoy a "puppuccino," whipped cream in a cup, which was a hit with the animals. There were also several contests at the event, as well as a large group of vendors, displaying a variety of pet supplies including houses, leashes, food, obedience training supplies and treats.

The different agencies and organizations also had information on hand to give to prospective owners and those who are wanting to become better pet owners. "With eight out of 11 dogs being adopted, this was a success. It also gives us a chance to highlight our shelter and the wonderful work our hard working staff and volunteers do on a daily basis," Riddick said.