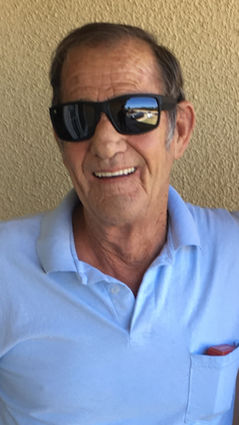 Ron Warkentin was born on March 14, 1950, to Katherine (nee Bestvater) and Aaron F. Warkentin of Shafter. Ron graduated in 1968 from Shafter High School, where he developed his love of tennis. He was a fierce competitor who went on to win the Bakersfield City Tennis Tournament's Mens Divisions D, Cc and B at the Racquet Club.

Ron started his work career with Superior Farming Co. as a pest control applicator. At one time he owned the Union 76 station at Lerdo and Highway 99. He was an automotive mechanic for over 30 years and loved working on cars, especially the older ones. He also loved watching NASCAR races, water skiing, fishing and family barbecues.

Ron lovingly cared for his mother and twin brother for many years at the Shafter home. During the last months of his life he was able to enjoy the beauty of the beach with his children in San Diego. On Wednesday, April 3, 2019, he died peacefully with family by his side.

Mourning his passing are his children, Sarah and favorite son-in-law Mark, and Daron of San Diego; and Steve and his wife Araceli of Bakersfield; grandchildren Merik, Keira and Lily; great-granddaughter Leyla; siblings Donald of Shafter and Helen of Oregon, and Margaret and Edith of Nevada; as well as many nieces and nephews.

He was predeceased by brothers Harold and Henry.

Graveside services will be held at Shafter Memorial Park on Friday, April 19, at 10 a.m. Memories may be left online at dignitymemorial.com through Pacific Beach-La Jolla Chapel in San Diego.