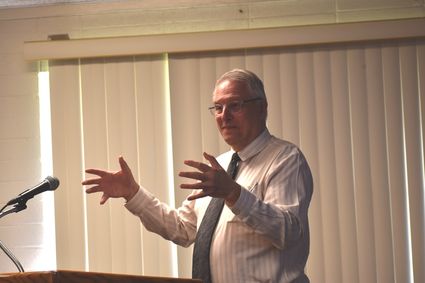 A special joint meeting between the Shafter City Council and Shafter Planning Commission on new environmental requirements facing the city and strategies to deal with them..

One issue that was addressed was the impending implementation of the new law, which has Shafter facing a new challenge when it comes to air quality issues. Under the provisions of AB617, the state selected two communities in the San Joaquin Valley to be pilot communities that will test the new procedures that are required to recognize needs and research possible solutions regarding air quality and environmental issues. The communities needed to be considered "disadvantaged communities" to participate.

A disadvantaged community is one that suffers a certain level of economic, health and environmental problems. In the study that was done, it was said that Shafter had a high level of heart disease, poverty and a high exposure to pesticides. It noted a general low level of overall health of its residents. Shafter was in the medium level of asthma cases.

As a result of these factors, a state steering committee was formed, and has been meeting for the past few months. The job of the committee is to create an environmental plan that will help improve the air quality and the quality of life in Shafter in general.

The committee has until October to create this plan of action. One task is placing several air monitoring stations throughout the city. Shafter has one existing monitoring station currently, which is near the high school. It has been used by the San Joaquin Valley Air District to monitor air quality levels here, such as levels of exposure to pesticides.

A city-paid consultant, Lloyd Zola, of Metis Environmental Group, presented the update to the combined groups on Monday night. One issue that is a concern once the steering committee has presented its plan for Shafter is that whatever regulations or restrictions that are recommended by the committee will be unique to Shafter. Currently, the San Joaquin Valley Air District is in control of the rules and regulations that each city and county has to follow when it comes to air quality. Once this plan is implemented, Shafter will be operating in its own unique rules, totally different than the regulations that govern the rest of the San Joaquin Valley.

"If the committee puts stricter regulations in place regarding the use of pesticides, the City of Shafter will have to abide by those rules, while the rest of the Valley, including areas as close as Wasco for instance, will be held to a different standard," Zola said. "If this happens, where do you think that farmer will operate?"

Zola said that the city will have some input while the plan is being considered, but ultimately it will not have a vote in what the plan will include.

Zola is recommending that the city be proactive in environmental justice and begin creating an addendum to its General Plan that will address environmental issues that residents face right now, staying a step ahead of the state. Zola said that this would be better than waiting for the state to start trying to make changes to the city's procedures and plans if it deemed them not sufficient in trying to improve the residents' quality of life. This means looking into ways to get residents more active, eating healthier and also have more opportunities when it comes to economic growth.

One other item on the agenda was an update on the Senate Bill 743. This bill would change the way environmental impact is considered when looking to alleviate traffic congestion.

Currently, when a city proposes a project that will impact traffic congestion in and around the city, the plan is evaluated under the California Environmental Quality Act. CEQA measures impact by "level of service" guidelines, measuring traffic congestion and considers how many lanes a road has, time stopped at intersections, etc. The new guidelines will be measured in vehicle miles traveled. This is the number of trips, times the average length of the trips. This would change the way cities look at a project and how to mitigate problems that might arise for the surrounding areas where the project is located.

For instance, if Shafter was going to build a roadway that will impact Bakersfield with more traffic congestion, Shafter would have to consider how this would negatively affect the city of Bakersfield and what could be done to mitigate the damage that would be done.

With the new bill, CEQA would not be a factor, meaning that a city could follow through with a project without it being necessary to deem if it will result in a negative impact on a surrounding community. Zola said that this may result in tension between communities if they propose projects without taking into consideration the negative environmental impact the project might mean for a neighboring community.

"The primary method to mitigate negative impacts currently is to look into expanding the intersection capacity, or expanding the roadway, easing the negative impact on the community. With the implementation of the new bill, the primary focus and methods proposed is to be to increase use of transit, bicycle and pedestrian travel, and reducing the need for automobile travel." Zola said that this might work for big cities like San Francisco and Sacramento, but this will not be feasible for rural communities.

There will be several workshops and meetings regarding these issues as the implementation of these laws begin.