'Beauty and the Beast' on stage at Shafter High 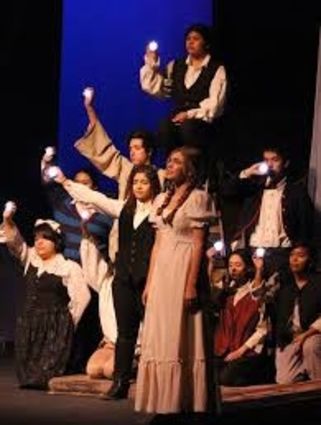 The Shafter High Drama Department in their production of "Peter Pan and the Starcatchers."

The Shafter High Drama Department is inviting the community to be their guest on Thursday, Friday and Saturday as they put on their production of Disney's "Beauty and the Beast."

The performances begin at 7 p.m. each night. The troupe, led by advisor Hal Friedman, have been in rehearsal for the production for two months, and their work will be on display as the curtain goes up on Thursday night.

The Drama Department has kept their members growing through the transition that saw the retirement of longtime teacher Carla Stanley and the entrance stage right of Friedman.

Friedman came to Shafter High with experience on Broadway, community theater and in the classroom. Last year, the team gave the community a variety of performances that stretched their range, going from intense dramas to lighthearted comedy. This production is the tale of an arrogant young prince and his castle's servants, who fall under the spell of a wicked enchantress who turns him into the hideous beast until he learns to love and be loved in return.

The spirited, headstrong village girl Belle enters the beast's castle after he imprisons her father. With the help of his enchanted servants, including the matronly Mrs. Potts, Belle begins to draw the cold-hearted beast out of his isolation.