More $ for move of Public Works 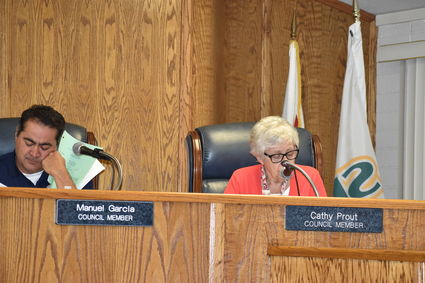 The City of Shafter approved an amount close to $800,000 for improvements to land recently purchased by the city to house the new Public Works yard and its offices.

The property down the street from the Shafter Community Correctional Facility was previously used by Global Fabricators. The facility was purchased by the city for $4.15 million.

According to Public Works Director Michael James, the funds will be used for the addition of an additional restroom, equipment purchases and making other improvements. The total for equipment is approximately $378,000, and the remainder of the funds allocated to administrative costs and building costs.

In addition to this item, the Council also approved the purchase of a new automatic targeting system for the Shafter Police Department. Chief Kevin Zimmermann said that the old system is antiquated, and the department needs to update equipment to train properly and give the staff and trainees the ability to make split decisions with accuracy. The total for the system is approximately $36,000, of which $10,000 is for implementation of the system.

One of the final items on the agenda was the approval of Tract 7346, which is located at the Gossamer Grove housing development. Lennar Homes is in the process of getting approval for its next phase that will include homes, a park, and a school site.

The tract will be broken up into 300 parcels that will be used for residential homes. The homes will have a square footage ranging from 5,000-square-foot lots up to over 12,000 square feet.

One of the conditions of the approval of the resolution was the stipulation from North Kern Water District that all homes and properties in this tract will not be subject to service of their wastewater by the North of the River Water District. The agreement is that all homes and businesses will have their service go to the City of Shafter's system, eventually going to the city's main facility off of Seventh Standard Road.

The developer hopes that the properties will be constructed by the end of July.