At 91, Jim Holt calling it quits 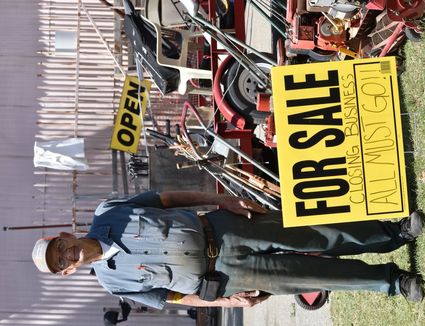 Holt is hoping to have everything sold by the end of the month.

If you have lived in town any length of time, you have met this long-time resident of Shafter. He is colorful, feisty and a great storyteller.

James Holt has been in business in downtown Shafter at his Central Avenue location for 38 years. Holt is selling off his equipment and inventory, calling it quits. "I have sold about $10,000 worth of equipment so far, but I still have quite a bit of equipment, tools, and antiques left. I am trying to get rid of all of it by the end of the month," he said this week.

Holt said that he just decided that it was time to close up while he was still healthy and able to enjoy retirement. "I am 91, but the doctor the other day said that I had the body of a 50-year-old. Well, I think this is a good time to hang it up."

All 12 of them started work in the potato fields. They would pick potatoes, and that first week they made $150, which was great for that time. As he grew up, Holt kept working in the potato sheds until he went into the service in 1950. He went to Korea and served in the Army until 1953.

Once back in Shafter, he borrowed $200 from Bank of America, with his parents as co-signers, and started The Hut Drive-In. He didn't stay in the restaurant business for long, making a change after about 10 months. Holt then went to work in the service station and garage business. Holt ended up with two service stations and would run them until 1968, when he bought five trucks and spent 10 years in the trucking business.

Wanting to get back into the mechanic field, Holt opened up his shop at his current location in 1981. He first began with working on automobiles, but then started to focus on small engines, such as lawnmowers and chainsaws, running Jim's Lawnmower Repair Shop on Central Avenue. Throughout the years, Holt said that he always loved Shafter and the people, calling Shafter "the best place to live in the world."

For years -- 11 years straight, in fact -- Holt hopped on his motorcycle, towing a small trailer, and rode across the United States. He traveled with his dog, Harry. They made friends everywhere they went.

In a recent interview, Holt brought out a scrapbook of press clippings of him and Harry, documenting their travels. He also showed letters he received from people that they met on their way across the country. They would always say, "It was such a pleasure meeting you and your amazing dog. We will never forget you guys and hope you keep traveling." 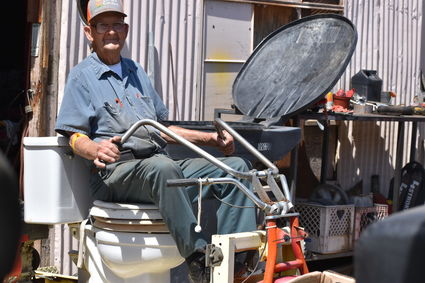 Holt made this vehicle that he calls his SUV (Senior Utility Vehicle).

Harry was poisoned and died. A reward was offered, which was raised by the many friends that they had met on their way, trying to catch the culprits who caused Harry's death. They never caught the responsible parties, but Holt said that he would never forget the love and support he received from the people that they had met. Holt said that they traveled all the way to Alaska one year, and another they traveled as far as Nova Scotia to the northeast. One of their favorite routes was the Blue Ridge Mountain Parkway, which they tried to hit every time.

Holt is one of three of his family that are still living, his sister and his daughter, both who live in North Carolina. Holt's brother Glenn, who was married to the actress Annette Funicello and who owned a horse-racing stable in Shafter, passed away two years ago.

Holt said that he is looking forward to the time off, but will miss the work, as he likes to say, "I've been working since I was five years old. I haven't known any time in my life that I wasn't working." His father was a sharecropper, so all of the family needed to contribute as soon as they were old enough to help out.

The story continues, and Jim Holt will likely give you more details if you stop by the shop at 125 Central Ave.