The Luminaria ceremony is a highlight of the event.

The cities of Wasco and Shafter have a rivalry which is one of the fiercest and oldest rivalries in the county, if not the state. Students face off on the gridiron and on the courts, and the residents of the respective cities have grown up with the tradition of disliking the other community.

"The rivalry is in our blood, really," said Marco Montoya, a 1978 SHS graduate. There is one exception to the rule, however. Each year, on the football field of Wasco High School, the residents of both cities come together not to face each other in battle, but standing side by side to do battle against a common foe: cancer.

The annual Wasco/Shafter Relay for Life even was held on Saturday and the cities came out in force to fight this horrible disease. Teams were formed months ago, raising money to help find a cure.

Wasco Mayor Alex Garcia welcomed the participants and told them that the ultimate goal was to help eradicate cancer, making events such as this one unnecessary. The first lap of the event is reserved for the survivors who have beaten the disease. People lined the track, cheering on the purple-clad participants who walked around the track, celebrating their victory. Among the walkers was Maria A Landeros from Shafter. "I love to be in this event. I am a cancer survivor and this is the 12th year I have been cancer free."

The event was 12 hours long, running from 10 a.m. to 10 p.m. The day was filled with games, music, entertainment and inspirational words from those who have fought and are fighting this great fight.

The event even drew people not from Wasco or Shafter, all wanting to be involved in the relay. Leonard Sosozki and his wife from Bakersfield found out about the event and decided to come participate. Sosozki brought a long stick he had created with a bunch of walnuts attached to it. A cancer survivor, Sosozki said that he built the scepter to remind men to check "their walnuts" before it is too late.

Sosozki was talking to Shafter resident Ralphie Santos before the opening ceremonies, recounting their own fights against the disease. Santos listened to his body as it was telling him that something was not right. Not getting the answers he was searching for, Santos finally found a doctor that diagnosed him with prostate cancer. Santos had surgery and just avoided his bladder exploding like a balloon. "I have been cancer free for 11 years and I never miss this event, wanting to let everyone know that God is good, and this disease can be beat." 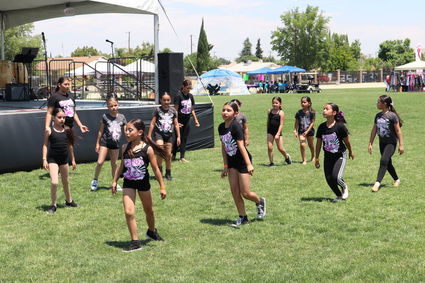 Local talent that helped entertain the crowd throughout the day included Shafter's Dixie Nuts, a Dixieland band that played some hopping jazz ditties, and award-winning dance troupe Planet Dance from Wasco. The kids performed a few numbers displaying why they are defending national champions in the team dance category.

One of the highlights of the event is the Luminaria ceremony. The track is lined with decorated paper bags lit up, making a circle of light around the track, memorializing those who have been lost in the fight against cancer.

After 12 hours of walking, celebrating, tears and joy, the Wasco/Shafter Relay for Life Committee presented the American Cancer Society a check for almost $59,000. The event celebrated not only a big donation that will go toward finding a cure, but also a chance for two rival communities to unite as one.