SHS puts on 'beauty' of a show 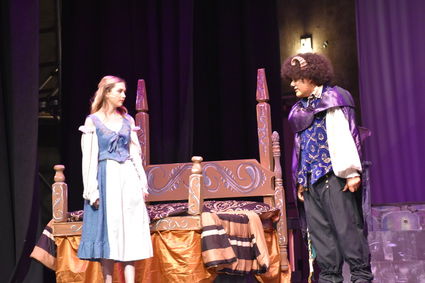 Kristen McGuire and Arnulfo Gomez as the Beauty and the Beast.

The Shafter High School Drama Department put on their production of Disney's "Beauty and the Beast," Thursday through Saturday nights last week. Drama Club advisor Hal Friedman put together a show that was a challenging one, with characters with distinctive accents, as well as some formidable songs to perform.

Friedman has been advisor since he took over for Carla Stanley last year. He has accumulated a talented group that have performed a great variety of shows, including comedy and fantasy, such as "Peter Pan and the Starcatchers," and this year's Disney production.

This production is the tale of an arrogant young prince and his castle's servants who fall under the spell of a wicked enchantress, who turns him into the hideous Beast until he learns to love and be loved in return. The spirited, headstrong village girl Belle enters the Beast's castle after he imprisons her father, Maurice. With the help of his enchanted servants, including the matronly Mrs. Potts, the tea pot, Belle begins to draw the cold-hearted Beast out of his isolation.

This production had a cast full of talented actors who were stars in their own right. From Kristen McGuire as Belle, to Arnulfa Gomez as the Beast, to the villagers, it was a full ensemble effort that saw all of the roles shining. 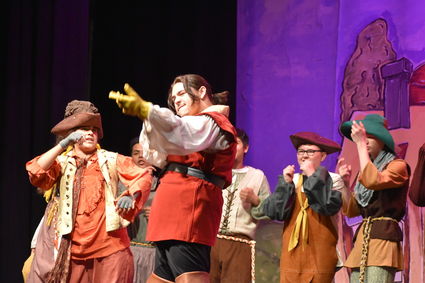 Chance Rubacalda as "the catch of the village," Gaston.

McGuire's powerful voice gave her Belle a strength, as well as a quality that could soften as she dealt with her quirky father. Playing the Beast in mask and makeup, Gomez had to emote through his booming voice and his mannerisms and actions, giving the Beast a hard edge and a cold heart, but also able to portray a gentle side as his heart starts to melt with the presence of Belle.

Gaston has to be one of the most loveable and hated villains in a Disney production. Chance Rubacalda plays Gaston perfectly, with an arrogance that makes him the "catch of the village," but with also a dark side that builds as he realizes that Belle does not return his affections.

The supporting cast was a group of actors that are at once hilarious, loveable and endearing as they sing and dance through a challenging number of songs.

Among them were Anthony Coon as Lumiere, with a spot-on accent and Daniela Garcia as the stodgy but funny Cogsworth. There wasn't a weak link in this chain of characters, everyone helping tell this story of love and redemption that teaches that beauty is truly in the eye of the beholder.