Education gets a budget boost 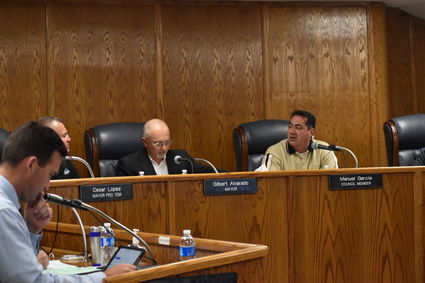 The Shafter City Council approved an increased $870,000 budget for 2019-2020 for the Education Partnership Department on Tuesday night.

Members of the City Council discussed what the increase in the budget would be used for. Part of the reason was an increase in incentives for the Advanced Placement Program that rewards high school students who pass standardized AP tests. The program also helps fund the exam fees for the tests.

David Franz, director of the department, commented that this increase shows the improvement of the students and displays the success that the program has had.

There were members of the Council that wondered why the department, since it has operated under its budget in previous years, could not operate at a lower budget that had been proposed. When questioned how the department would handle the situation if the budget was kept at the current $841,000, Franz said that there is always an employee or two who retires or resigns during the year, which would mean a saving if they decide not to fill the position. When asked what would happen if there was a full staff, with no one leaving the department, how the cuts would be handled. Franz said, "Well, we have never had that situation, but there would have to be a decision to cut somewhere."

The Education Partnership Department was started almost 10 years ago as a result of the city's decision to help build a successful program that would have an emphasis on educating youth, as well as the adults in the community who need teaching or training to help them get a job and further their careers. Franz was hired and the Education Project began.

This project partnered the city with the local school districts in creating programs that would focus on getting students learning to read in the first three grade levels, with the goal of educating them early in their education careers, while their minds were still developing and retaining at their peak. It has been shown that students who learn to read by the third grade are far more likely to retain the skills and develop better as students as they progress through the higher grades

The council discussed the need for the increase in the budget. Mayor Gilbert Alvarado was in favor of leaving the budget at the previous year's amount, noting that the city had a variety of needs that they need to meet. "I know that some people may think that I am against education, but I am all for education. My entire family is in education. But, we as a city have a lot of needs, and we need to take that into consideration."

City Manager Scott Hurlbert told the council that the $30,000 increase in the budget – about 50% of the total -- is taking into consideration cost-of-living payroll increases. Council member Chad Givens suggested that the council approve the $870,000, but to make this amount the cap for each year for the next three years. Hurlbert said this was not an option, with the council not being able to set a budget past the next fiscal year.

Councilmember Cathy Prout said that when the Education Partnership was started, they actually created a position for Franz, with the goal of improving the education system, helping them create a more conducive learning environment and giving the schools and the students the tools necessary for success. "I think that the success has been displayed in the improvement in our students as they progress through the different levels of education." 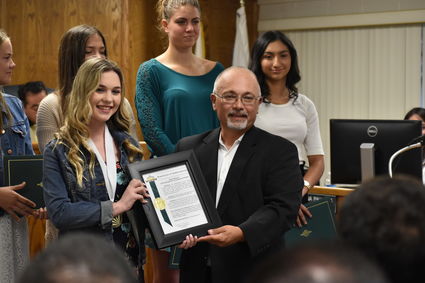 Mayor Alvarado gives the Key to the City to this year's DYW of Shafter, Kristen McGuire.

In other council action, the city gave the Key to the City to Distinguished Young Woman of Shafter Kristen Mcguire, and gave certificates of recognition to the other award winners from the competition.

The council also recognized Aaliyah Chavolla for being named First Alternate and winning the Scholastic Award. Clarissa Vander Poel was honored for her Second Alternate award as well as the Scholastic Award. Being recognized for her receiving the Third Alternate award was Kaelah Perez. Kaelah was also honored for winning the Fitness and Talent portions of the competition. Isis Brownlow received a certificate for her being named the Fourth Alternate. Stephania Ledezma was recognized for her being the recipient of the Spirit Award, which is voted on by all of the competitors. All of the young ladies were congratulated by the council on their awards and their examples that they have set for young girls all over the city.