Nataly Espinoza puts the ball over the plate for a strike. 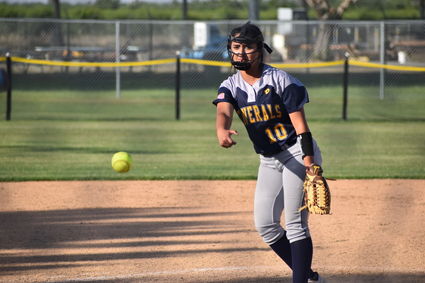 Nataly Espinoza puts the ball over the plate for a strike.

The Lady Generals were dominant this season, going 19-5 overall, and dropping only one game in SSL play -- a 6-5 loss to Chavez High School. Shafter's other losses were to SYL powerhouses Ridgeview, Stockdale, Frontier and Centennial.

The Lady Generals outscored their opponents for the season by a total of 270-64. With powerful pitching from Jasmin Torres, Nataly Espinosa and Katrina Trejo, the Lady Generals won by the four-inning "mercy rule" in 14 of their 24 games this season. 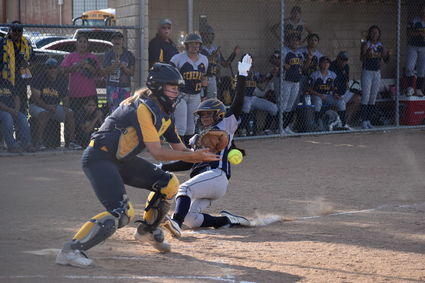 Nataly Herrera slides under the tag for Shafter's second run of the game.

Shafter started tournament play with a 17-6 win over Riverdale in the quarterfinal game, before dropping their next game to the Broncos. The Broncos won last year's semifinal with a 6-2 victory. On Tuesday's game, Shafter could not get their bats going as they didn't get a runner past second base for the first five innings. Meanwhile, Kern Valley managed five runs during that time, putting the Lady Generals in a 5-0 hole.

Shafter's bats woke up in the sixth inning, with Jasmin Torres starting the rally by getting to first after being hit by a pitch. Nataly Espinoza followed that with a hit to right field. Katrina Trejo then pounded a hit to right center, scoring the Lady Generals' first run. Shafter added another run when Natalie Herrera slid under the catcher's tag at home plate, cutting the lead to 5-2. Unfortunately, the rally was stopped, and the Broncos closed the game out in the seventh for the victory.