Coffee and conversation with cops 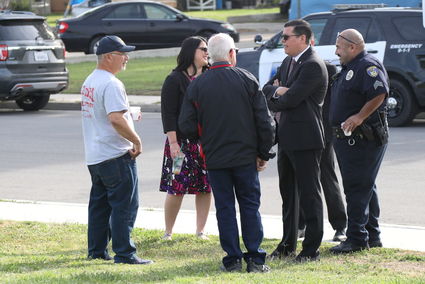 Mayor Gilbert Alvarado is with residents as they talk to Assemblymember Rudy Salas and Sergeant Lionel Lopez of the Shafter Police Department.

One in a series of Coffee With a Cop events was held Saturday at Veterans Park in Shafter. The events allow residents to meet the officers who protect and serve the city of Shafter, making it a safe place to live.

Police Chief Kevin Zimmermann said the event had no agenda, no speakers or speeches, just a chance to voice any concerns, ask question, or just talk with the different officers.

Martin Rualta, who was there with his son, said, "This was a great time. I try to teach my kids that police officers are there to help them and keep them safe. It is nice for them to see the officers in person so they can see firsthand that they are our friends and want to help and serve us." 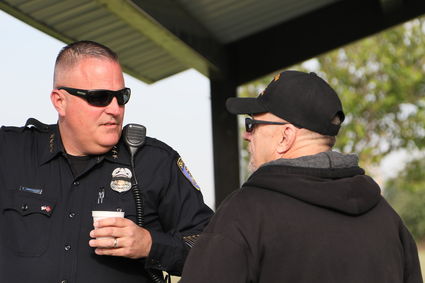 Police Chief Kevin Zimmermann spent the morning answering questions and listening to concerns from the residents of Shafter.

Coffee and refreshments were served, as well as a large dose of fellowship as the crowd asked the officers questions regarding safety, police procedures and several other topics. Assemblymember Rudy Salas was on hand, greeting people and talking to the residents. There were other local dignitaries there as well, including Shafter Mayor Gilbert Alvarado and several City Council members.

At a recent event, Captain Diane Barnett mentioned that events like this do much for the relationship between the officers and the community they serve. "It is a time that we can get together as a community, letting the people know that we are here to protect them and serve them in any way we can."

Following the Coffee with a Cop, the park was the site of an unveiling of the Veterans Memorial statue, which is in honor of local veterans who have served our city, state and country, including Police Chief Kevin Zimmermann, who is a veteran who served in the U.S. Marine Corps.