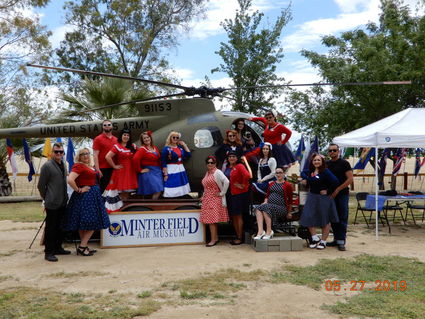 Shafter Minter Field Air Museum again participated in the Memorial Day Service held on Monday afternoon at Camp Hamilton. The service was well attended, with a large crowd participating in a barbecue, a ceremony including bagpipes, speakers and a roll call of names of the veterans who are honored at the Park.

Minter Field Air Museum brought their Follow Me yellow jeep and their popular LOACH helicopter. Attendees had the opportunity to check out the jeep and chopper, getting their pictures taken inside of the jeep and sitting in the cockpit of the infamous coptor.

California Pinups & Patriots was also on hand, partnering with Minter Field Air Museum to greet the crowd and pose for pictures. Pinups & Patriots is a nonprofit organization that was formed to honor and serve military members. They dress up in '40s and '50s style, reminiscent of the USO entertainers of old. They attended several Memorial Day services this year, and also appear in a variety of events annually.

The speaker this year was Minter Field Air Museum's Major General James Whitehead. Whitehead spoke of the bravery that the military men and women have shown through the years, making the ultimate sacrifice for freedom. He concluded his remarks by toasting to all of the soldiers who have paid the price for our liberties.

Camp Hamilton is located in the mountains north of Bakersfield, on the other side of Lerdo Prison. At the park, there are now over 300 trees planted in honor of veterans.

When Master Gunnery Sergeant Glenn Denton returned from Vietnam he wanted to find a way to honor his fellow brethren and support his future brothers and sisters in arms. Denton bought 10 acres of land just outside of Bakersfield to create a veterans memorial park named after his fellow brother-in-arms, Lenard Hamilton. Camp Hamilton, as the park was named, serves as a remembrance of former soldiers and a place of support for current and recent service members.

Camp Hamilton's goal is to bring people together to read the names, reflect, and remember those veterans whose names are inscribed on the numerous trees throughout the camp.

Master Gunnery Sergeant Denton and the Camp Hamilton supporters believe that serving our veterans is one of the most valuable contributions society can make for the nation. 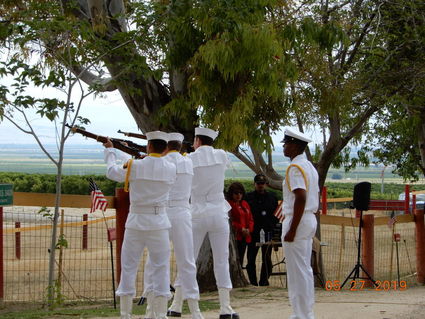 [This story was corrected on May 31, 2019, to reflect the following information: Pinups for Patriots is no longer in existence and disbanded. The new nonprofit formed in January of 2018 is now local and called California Pinups & Patriots.]