Hitchcock's keeps city on the road -- Making friends every day 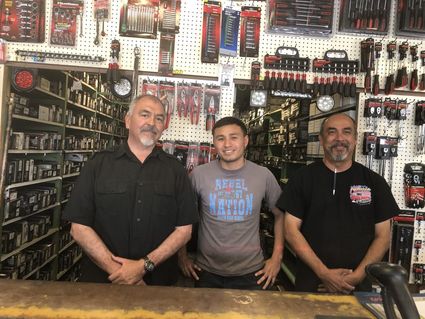 Jesse Escobedo, Juan Sanchez and Randy Roque can help you no matter your need.

Almost from the time of the Model T to the day of the Tesla, Hitchcock Auto Parts has been the go-to source for Shafter residents in need of items to keep their vehicles running smoothly.

Now in its 96th year in business, Hitchcock has seen generations of drivers come and go. Owner Jesse Escobedo says several generations of families keep coming back, making his customers feel more like family. Escobedo has owned Hitchcock since 1986.

Escobedo credits the loyal customer base and Shafter's small-town atmosphere for Hitchcock's success. "I love Shafter and its people," he says. "They have been so good to us. I hope our customers can see that affection in the way they are treated."

Hitchcock's business fluctuates with the economy, Escobedo said, although those fluctuations might not always be visible. "When the economy is down," he said, "it might hurt the agricultural side a little, or the fields, but the business on the automotive side picks up because people are fixing up their cars more often instead of heading to the dealership."

In the current economy. Escobedo said, "We have a great mix of sales, with some automobile items, agriculture and a lot of industrial products and parts."

Not one to toot his own horn, unless it's on his car, Escobedo does a great deal anonymously for the community, and is never one to shy away from a friend or group in need of assistance. Hitchcock is generous to the community and supports its children in many ways. Escobedo remembers all of his customers and considers them like family. Several members of his staff have been with Hitchcock for years.

Randy Roque, David Velez and Jose Sanchez are skilled in a variety of fields, including automotive, industrial and agricultural. If they don't know about a certain part, they will work to find the answer.

Escobedo also said that with Hitchcock's expansive inventory, they have parts for all of their customers' needs. If by chance, however, "we don't have a certain part, we have our warehouse just 12 minutes away," he said. "We make numerous trips back and forth every day filling our customers' orders, no matter what their need is."

Hitchcock's is in its 96th year of business.

Escobedo says some customers come into Hitchcock and he remembers selling auto parts to their parents or grandparents. Back when Hitchcock founder Chuck Hitchcock ran the establishment, there was a saying, Escobedo said, that "every time we make a friend, we grow a little."

"I was kind of embarrassed and reluctant to use that saying because it was really Chuck's," Escobedo said, "but even today, it is such a great saying. Every time we make a new friend, or take great care of an existing customer, we grow a little."