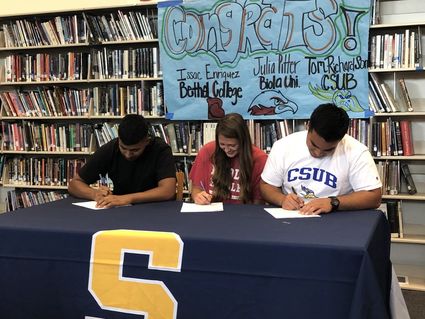 Three Shafter High seniors signed letters of intent recently at a ceremony in the Shafter High Library, marking the next step in their educational and athletic careers. Tom Richardson, Isaac Enriquez and Julia Pitter made their collegiate commitments official on last month, cementing their futures for the next four years.

Enriquez signed with Bethel College in Kansas. Enriquez was a standout wide receiver for the history-making Shafter Generals football team who dominated their opponents this last season, making an appearance in the Central Section title game. Enriquez had over five games in which he surpassed 100 receiving yards, as well as scoring over 10 touchdowns on the year. He was a steady force in the General offense.

Enriquez will be majoring in business and playing wide receiver for the Threshers. Enriquez visited the college and was impressed with the campus, the faculty, coaches and the current players. "As soon as I made the visit, I knew that I wanted to go there. I also like the town and having a chance to travel from home and be on my own," said Enriquez. "I want to thank Coach [Jerald] Pierucci and the other coaches, who helped me so much become the player I am today."

Pitter has been involved in track even before she began at Shafter High School. She competed in juniors and was already training regularly while still in junior high. But, it wasn't until she became a General that she tried competing in the triple jump, which has turned out to be her best event. Pitter trained in the long jump and ran a bit, but it has been the introduction of the triple jump that has helped put her name in the conversation when it comes to the best track athletes in the SSL and Central Valley.

Pitter will be attending Biola University in the fall, with a full scholarship to compete in track. Pitter chose Biola after making a few visits to different colleges around California. "I decided on Biola because I love the atmosphere and that it is a Christian college. I think that this will be the best environment for me," said Pitter. Pitt said that the coaches, teammates, and teachers are very nice and the school is competitive in track, vying for titles year in and year out. Pitt will be studying nursing, working to get a degree and become a registered nurse. Pitter thanked her coaches who helped her perfect her technique, as well as working her hard, allowing her to reach her potential.

Tom Richardson signed a letter of intent to become a part of the Cal State Bakersfield track team. Richardson said that he visited several different colleges, but he really liked the idea of being close to home. "I'll still be able to eat my mom's cooking, and will also be able to concentrate more on my studies and track," said Richardson. Signing a letter of intent to a Division I college is in itself a pretty big deal, but for Richardson, it is an amazing accomplishment, looking back to where he was just a year and a half ago. During his sophomore year, Richardson injured his shoulder, requiring him to have surgery. But Richardson worked hard on his rehab, keeping the goal of getting back to throwing in the forefront of his mind. "That was a really dark time, but I had a lot of great people around me that didn't let me get down or give up. This is a great time for me after what has happened in the last couple of years."

Richardson will be majoring in biology and is thinking about a career in sports therapy or sports medicine. Cal State Bakersfield has a strong Shafter connection when it comes to throwers, with Richardson having the chance to work and train with the Roadrunner throwing coach since he was in junior high. 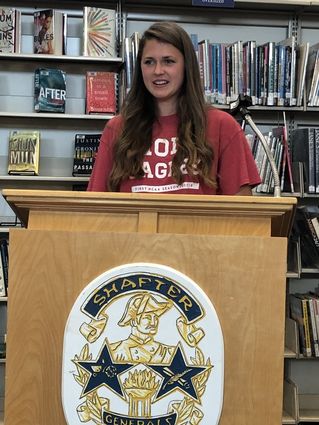 Julia Pitter will be attending Biola University, majoring in nursing and competing on the track team.

Any other year, Richardson would be the talk of the Valley, being ranked in the top five throwers in the section, as well as setting age group marks along the way. But, Richardson happens to be competing in the same events as the top thrower in the nation, Daniel Viveros from Liberty. Richardson said that it actually helps him, having a great thrower to compete against. "I think it is great having someone to compete with and I think that we help push each other and get better," said Richardson.