'In God We Trust' decal plan at council 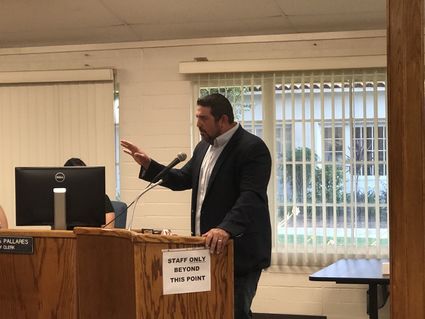 In a City Council meeting that saw only two items on the agenda, the public comment portion of the meeting dominated the action with a packed house of citizens eager to voice their opinions.

The majority of the discussion was on the recent proposal that would emblazon all Shafter Police Department vehicles with a decal reading "In God We Trust."

Pastor Justin Medlock of the Shafter Christian Fellowship Church proposed the idea of the decals. Medlock spoke about the need for the decals, similar to those recently placed on Delon Police Department vehicles. "I was not always a pastor, in fact, I was a drug addict for 13 years. It was the words and actions of a law enforcement official that helped me turn my life around."

Medlock said that he was stopped on Seventh Standard Road and handcuffed. While in custody, the sheriff's deputy talked to him like a father would talk to his son about how he needed to straighten up and get his life together.

Medlock believes that the decals would help the department bond with the community and send a positive message to the residents. Medlock also told the councilmembers that they would probably come up against opposition and said that they needed to vote with courage and not out of fear. "I pray that you guys will stand up for what is right and vote that way."

There were several pastors that spoke on the night, and residents who thought that the decals are constitutional and that each city had a right to make their own decision. Pastor David Vivas Jr. of the World Harvest Church in Delano, reminded the crowd that the national motto, "In God We Trust," has been in existence since 1956.

"This is our national motto, and therefore it is constitutional that we have it on our police vehicles. I am a coin collector and know that it has been on our money since the 1800s," Vivas said.

Patriotism came up in the presenttions, with a couple of speakers saying that the decals would be a good way to show it.

Offering a different viewpoint was Shafter resident Estevan Ramirez. He said that he has loves the city of Shafter and has a lot of respect for the men and women who protect it. But, Ramirez said, he doesn't think that putting decals on the cars would do anything to help the community.

He said that he did not believe in God, and he has felt like a minority for most of his life.

"I know that I am the minority here tonight. But, I will not be quiet. I am going to speak up." He went on to say, "I believe that this action would further alienate myself, and those who do not happen to believe in God, from the rest of the community."

Ramirez said that people tell him to just ignore it when people are praying and he is not, or in other situations in which he feels separated from the rest of the community. "But, how can I just ignore a decal on our city police cars? I am not going to ignore this. I want to be involved in my community and not have to feel that I cannot speak my mind or be included."

He went on to say that there are other alternatives if patriotism was the goal. "I love this country. I heard patriotism mentioned. Does this mean that if I don't agree with this proposal that I am less of a patriot than the majority? I don't think so. If patriotism is a factor, why not have a bald eagle or an American flag on the vehicles?"

Mayor Gilbert Alvarado suggested that the issue be put on the agenda for the next City Council meeting, so that the matter could be discussed and voted on at that time.

In another presentation, Gary Rodriguez gave an update on the North Shafter Improvement Project, which includes road repair, traffic signs and signals, as well as the inclusion of sewer service for residents in the northern part of Shafter. Rodriguez the sewer service was implemented in 2011. He said that residents started requesting services for different issues in the north in the mid-1970s. He said that progress has been slow going, and he urged the council to make the requested improvements in a more timely fashion.

Rodriguez said that there is an immediate need for sidewalks, shoulders, and in some cases, stop signs or stop lights around Highway 43 and Fresno Avenue. There were pictures submitted that showed tire tracks where cars had gone onto the shoulders of the highway, at the area where children embark and disembark from the school bus daily during the school year. In some instances, he said, the children are having to cross the street behind vehicles that are waiting at the intersection, another safety hazard.

Hurlbert also said that there had been requests made to Cal Trans -- the state Department of Transportation -- to conduct a study at the intersection, which is controlled by the state -- to see what should be done to alleviate the dangers for the city's children and other pedestrians. Hurlbert did say that the progress was not moving as fast as they would like, but action has been taken and will continue.

In a regular agenda item, the City Council approved the bid of Bowman Asphalt to do the work on the 2019 Street and Alley Improvement Project. This includes work that will be done on James Street. Bowman came in with a bid of a little over $680,000. The council approved a budget of up to $750,000 for the project from the city budget.