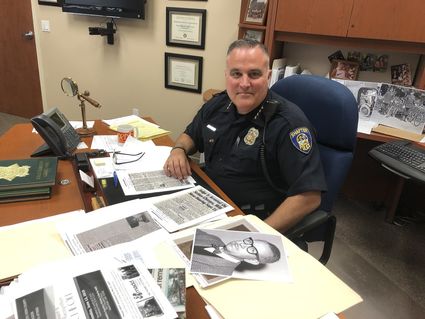 Chief Kevin Zimmermann is working to make sure the history of the Shafter Police Department is preserved.

The city of Shafter is rich in history, as seen at the city's museums -- the Depot Museum, the Green Hotel and the Minter Field Air Museum. The Shafter Police Department has a rich history, too, but until recently, that history has been just for those who lived through it, or happened to know someone that was involved in the department over the years.

A couple of years ago, incoming Police Chief Kevin Zimmermann thought that with the rich history that Shafter has, it would be great to have a record of the events, people and artifacts that make up the Shafter Police Department throughout its 80-year history. "All of this history, the people, artifacts, will just eventually go away if we don't do something to preserve its place in the history of the city," Zimmermann said.

A historical committee was formed, and they started collecting artifacts from past chiefs, officers, relatives of those who had served in the department. A display case was put in place, showing the different weapons, uniforms, badges, etc., that have been used through the years.

There is a new project underway, and it is looking to create a product that many think would be a great thing to have for anyone who is interested in history, law enforcement, or knew or had family in the department. Zimmermann and his committee are working to put together a book that would depict the history of the department, along with pictures of old cases that were in the newspaper, pictures of weapons used, different uniforms and badges, as well as all of the departments and programs the agency has had throughout its history. "We have had 14 chiefs of police in our history and each one will be depicted in the book, as well as the officers and staff who have served this city throughout its history," said Zimmermann.

Zimmermann said that the book would trace the roots of the department from its beginnings, with its first Chief of Police Murray Arnold, to the present. Arnold was the department's first chief, said Zimmermann, at the young age of 24. "Arnold had graduated from Shafter High and just about five or six years later, he was the chief of police."

Zimmermann said that one of the highlights from working on this project has been the relationships he has built with families of former chiefs, officers and dispatchers who have served in the department over the years. "I was fortunate enough to get ahold of the uniform worn by our first police chief, Murray Arnold, given to me by an ex-officer. I contacted Arnold's wife and she sent me his badge, that is on display with the uniform."

Chief Zimmermann is reaching out to the entire community for assistance in this project. "Anyone who has any stories about the history of the Police Department, knows someone who has served in the department, might have some artifacts from the time that the officer served, we would love to have it. We want to make this book something that families of those who served would like to read as well as just a resident of Shafter who wants to relive some history of Shafter," said Zimmermann.

Zimmermann said that it will be a book resembling a yearbook, with dates, pictures and stories of different eras in the city of Shafter, as well as the interesting array of characters that have served the city of Shafter. "If anyone can help with this project, don't hesitate to call me at my number at the department, 661-746-8915," Zimmermann said.