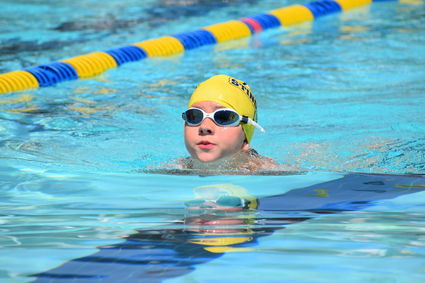 The Shafter Stingrays Swim Club played host on Saturday, holding a Kern County Swim meet that attracted teams from all over Kern County. There were a total of over 100 events, with over 500 swimmers competing. The Stingrays had top 10 finishes in several events, improving on their performance in the first meet of the season in Wasco.

Leading the way for the Stingrays were the performances of Annemarie Piuser, David Serrano, Sydnee Macias, Malachi DeWitt and Josephine Martin.

Piuser followed her stand-out performances in Wasco, which saw her capture two firsts, a second, and a fifth, with a first, second, third and fourth in the Shafter meet. Piuser placed fourth as a member of the Stingrays' Mixed 11-12 200 Free Relay team. The team, consisting of Piuser, Evan Perez, Sean O'Neill and Parker Valderamma. They improved on their fifth place time in Wasco of 2:25 and got fourth with a time of 2:22, Piuser added a third place in the Girls 11 50 Back finals, a second in the Girls 11 50 Butterfly Final and beat out several Rio Bravo Greeley swimmers to take first place in the Girls 11 50 yd Breast Final with a time of 41.70.

Josephine Martin opened her season with first place, second place and a fourth place. Martin placed fourth in the Girls 11-50 yd. Backstroke Final, second in the 50yd. Freestyle and took first place in the 50 yd. Butterfly Final with a 34.78.

David Serrano also had a very productive meet. Serrano swam in four events and placed in the top four in all of the events. He got a fourth place in the Boys 14- 50 yd. Freestyle, third places in the 50 yd. Breaststroke and the 50 yd. Butterfly Final, and placed second in the 50 yd. Backstroke.

The Stingrays had a total of 74 entries in the meet, with 28 different swimmers competing.

The Shafter Stingrays will be back in action on Saturday June 15 with a meet in Taft. There will be meets throughout the summer, culminating in the Kern County Finals on July 20 in Bakersfield.