'In God We Trust' 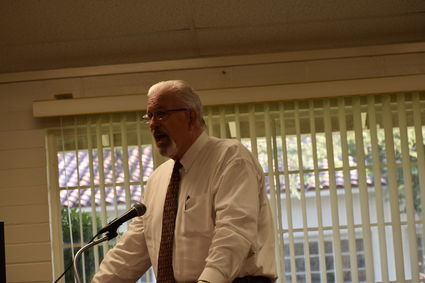 Pastor Jim Neal speak in favor of placing decals on all police vehicles.

In one of the few unanimous votes of the night, the Shafter City Council voted 5-0 to all Police Department vehicles with a decal reading "In God We Trust."

Just as with the last council meeting, a large crowd turned out to speak on the issue. Shafter Christian Fellowship Pastor Justin Medlock asked the council "to have the courage to vote for what they know is right."

As he did the previous week, 10-year Shafter resident Estevan Martinez spoke out against the agenda item, saying, "I don't need a decal on a car to have respect for the Police Department or the law. This is about having the courage to vote for what might not be the popular vote, but what you think is right according to the law."

All of the council members voted to approve the decals, which will not cost the city anything monetarily. Martinez's church will pay for the 18-inch-by-12-inch decals, he said. The decals have recently been placed on Bakersfield Police vehicles.

The unanimity changed quickly after a majority of the crowd left.

Another item on the agenda was a proposal to survey the community on improvements in the North Shafter area. At the previous meeting, the needs of improvements to roads, shoulders and a stop light in North Shafter was presented, including the stretch of Highway 43 entering Shafter from Wasco. Traffic data has been sent to CalTrans, who will do their own study on the feasibility of the improvements and what needs to be done. The survey was approved for distribution.

In the most divisive item of the night, Mayor Gilbert Alvarado had proposed having a city charter study session which would work to explain the charter and its laws to the City Council members. Alvarado also wanted to contract with a third-party attorney to review the charter and help them in their session.

Alvarado had previously requested options for attorneys, and City Manager Scott Hurlbert presented a list approved by the California League of Cities of lawyers that have experience in municipal law, as well as experience with charter cities. Two of the attorneys were affiliated with the company that represents Shafter as its city attorney. The other two on the approved list were from private law firms.

Alvarado said that he wanted to select the attorney to assist them himself, and clearly did not expect to choose from the list.

Councilmember Prout asked Alvarado why they would need a third-party attorney for this and why it could not be off of the approved list of attorneys. Alvarado stated again that he wanted to select a third-party attorney that is qualified in municipal law and that he just wanted to understand the charter better. Prout countered, "Gilbert, if you want to go outside the list and pick your own attorney, it seems that you have something else on your mind." Councilmember Garcia responded, "Well, if the mayor wants to do this, we should go with it." Alvarado made a motion to vote on the matter. The vote was 3-2 in favor of having a third-party attorney reviewing the issue to explain the city charter to the members.

There also will be a scheduled a city charter study session, which will involve the council members, a third-party attorney, as well as the city attorney. Alvarado, Mayor Pro-Tem Cesar Lopez and Councilmember Manuel Garcia voted yes and Councilmembers Chad Givens and Prout voted no.

Garcia thought that "it was unnecessary to waste $10,000 on a program like that." "Listen, there is going to be disagreement and dissension sometimes. That's okay. We don't always have to agree on everything," concluded Garcia.

Mayor Alvarado proposed in another agenda item to include plaques in the flower bed area where the Veterans Park Veterans Memorial is located, along with the names and titles of all of the City Council members on them. Mayor Pro-Tem Lopez mentioned that he questioned about why the names of the veterans were not on the memorial, and he was told that they were listed at the memorial at the cemetery. Lopez said, "I think what Mayor Alvarado is saying is that it is a legacy thing. That plaque will be something that we can go to with our kids and grandkids and show them the memorial."

Former Mayor Garry Nelson, who worked with the AmVets on the project, said that they considered putting veterans names on the memorial, but they decided to make it a monument to all veterans rather than just those who died. He said adding the names of the city leadership was never discussed in the workshops on the design of the monument.

Mayor Alvarado reiterated that he wanted the names and titles of the City Council members on it because it is a city park and they should be included in the memorial. The vote was 3-2 with Alvarado, Lopez, and Garcia voting yes, and Givens and Prout voting no.

On the final agenda item, Alvarado had proposed to have the City of Shafter seal be put in the middle of the wall of the dais instead of over to the left of the dais where it currently is. It was mentioned that because of the seal could not be moved without substantial damage to it, a new one would be required. 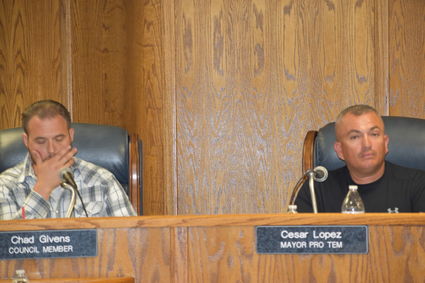 Councilmember Givens and Mayor Pro-Tem Lopez contemplate their next vote.

It was decided that the seal would be put in place directly behind the mayor's seat on the dais in addition to the seal that is on the left. The vote was 4-1, with Prout the only no vote.