Wilson takes attendees out to the movies 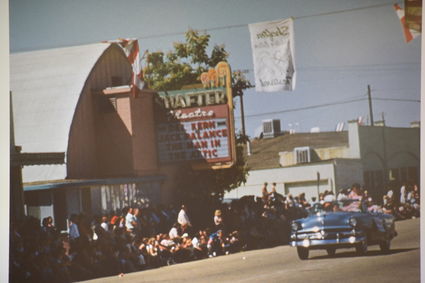 The Shafter Theater in its heyday.

At one time, Shafter had three movie theaters. The first theater was actually a four-walled structure that had no roof. It was aptly named the Shafter Air Dome.

Stan Wilson, of the Shafter Historical Society, gave a presentation before an overflow crowd at the Shafter Library Tuesday night about the history of this and the other theaters in town, as well as how the community has been portrayed over the years in film.

The Air Dome was a big draw and was opened in 1936 by George Moore. The theater was in the location where the Bank of America building stands now. The business was good until it was moved inside to the Clubhouse of the Shafter Woman's Club because of the inclement weather. Just three weeks after the move, the theater closed due to low patronage.

In May 1937, Panero Theaters opened the Shafter Theatre with seating for 750 people. Its first feature was "A Star is Born." The theater ran new movies, and the patronage boomed. Business was so good that a second theater was opened in Shafter, the State Theater, in November 1944. The State had room for 500 people. This meant that Shafter had over 1,200 seats in theaters in a town with a population of a little over 2,000.

With the popularity of the drive-in theaters, the Del-Kern Drive was opened in September 1950, accommodating 350 cars. A family could pay one price and enjoy a double feature in the comforts of their own vehicle. This was opened in the mid-1940s and was a big draw for teens, adults and families alike.

Just when things were booming, the 1950s and the popularity of television came. One by one, the theaters closed, with the last of them being the drive-in.

There were several attendees at the meeting that told tales of their time at the theaters. Dolly Hei had jobs at the theaters when she was a teenager, working the concessions. In a light moment, Hei told of the experiment that she and her bored co-workers tried one night. They oversalted the popcorn to see if that would mean more soda sales. She said that this trick "worked like a charm," with soda sales up significantly for the night. 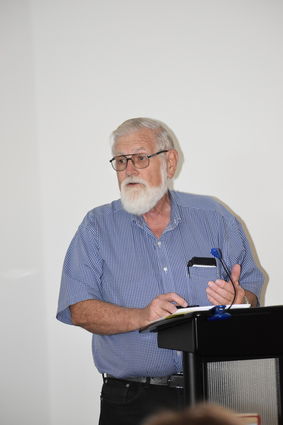 Stan Wilson gave a presentation on the history of movies in Shafter.

Wilson also told of Shafter's own movie star. Jean Chatburn was born in Michigan, but moved with her grandparents to Shafter in the 1920s, where she attended Richland Elementary School. Jean ended up moving to Hollywood and got a part in her first movie at age 20, when she was put under contract. She appeared with William Powell in "The Great Ziegfeld" and many other leading men of the day in at least 13 films. "She was truly Shafter's own movie star," Wilson said.

CORRECTION: This story was corrected with the following information on June 24, 2019 at 5:30 p.m.: The Shafter Air Dome operated the summer of 1936, Shafter Theatre opened May 1937, State Theatre opened November 1944, Del-Kern Drive opened September 1950. All Theatres were closed by 1967. The location of the Shafter Air Dome was in an empty lot to the northwest of the Bank of America and facing James Street. The Bank of America building was already standing, being built around 1921.