Shafter skies lit up for 4th 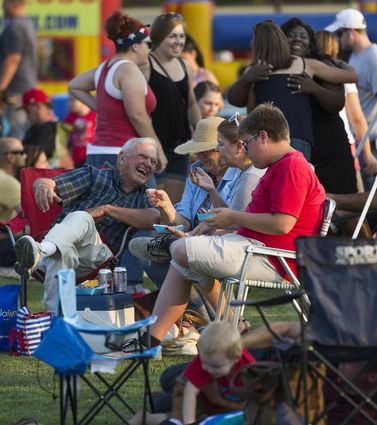 The Shafter fireworks took place too late for print coverage, but details can be seen on the Press website, TheShafterPress.com.

The night sky in Shafter was to be lit Wednesday night, as the annual Fireworks Show took place at Shafter High School's football stadium. The event was set to include a slate of activities for the entire family.

Years ago, the city of Shafter started holding their fireworks show on July 3, and the tradition has stuck. In the beginning, the event was moved to the 3rd because the company was doing the big fireworks show at Bakersfield College on the 4th, so Shafter chose to have theirs on the third. They then realized that with the change to the third, the cost was substantially cheaper, allowing the city to have an even bigger show for the same cost.

The event is put on by the Shafter Chamber of Commerce and is made possible by the generous businesses we have locally, as well as donation accepted throughout the year from individuals who support the event.

A variety of food is available at the show, and children are entertained with an array of games, activities on the football field as well as a dance contest is put on by local radio station 103.9 FM, The Beat, headed up by DJ Danny Morrison.

In 2018, the dance contest drew over 100 kids who showed off their moves, trying to win a trip to Magic Mountain. With all of the on-field activities, the crowd is ready to settle down for an amazing show of color by the time dusk arrives. Put on by world-renowned fireworks company Zambelli Fireworks International, the show includes a multitude of bursts of bright color, in every shade of the rainbow. Of course, the show has become famous for its powerful and booming finale, ending the evening with an onslaught of shells that are timed to go off in time with music, concluding the celebration.