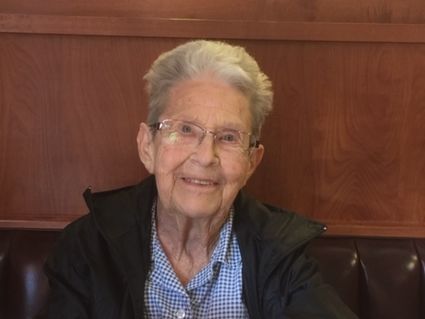 Beverly Watts passed away at the age of 96 at Hospice House of San Joaquin on June 25, 2019 with her daughters by her side.

Beverly was born in Omaha, Neb., to Fred and Viola Duble. She received a nursing degree from St Luke's Hospital in Denver, Colo.

Beverly worked as a nurse until she married Jack Watts on Oct 17, 1948. They had three children, Deborah Keplinger (Tim) , Stephen Watts (Debbie) and Kathy Brown (Ed), and five grandchildren: Joshua, Courtney (Mitch) , Matthew, Bree, and Ashley. She had a brother, Fred Duble (Beverly), who preceded her in death, and a sister, Shirley Lamson (Earl) of Canyon Country, Calif. She had several nieces and nephews.

Jack and Beverly lived and raised their family in Shafter. Beverly was baptized as one of Jehovah's Witnesses around 1945. She was a member of the Shafter congregation for many years and was loved by all

From a young age Beverly was an avid reader and surrounded herself with books. She passed that love on to her children. Beverly enjoyed sports, mainly tennis and golf. She taught her daughter Kathy and son Stephen how to play tennis and enjoyed playing with them for years. She started playing golf with her dear friend Nina Coleman and looked so forward to it each week. In later years she watched football and golf on TV with her son-in-law, Ed.

When Beverly needed new clothes, she knew her daughter Debbie was the one to take her shopping, and they had many fun times doing that. Beverly had a very funny, dry sense of humor and kept that humor until the end. After her husband passed away, Beverly was blessed with two great-grandchildren, Addyson and Jackson.

Beverly was a wonderful wife, mother, grandmother, and friend. She enjoyed nothing more than spending time with her children and her children enjoyed indulging and spoiling their mom. She was taken on many trips by her children over the last 23 years. She was a loyal and true friend to all.

Beverly was able to live in her home in Shafter until she was 94, when she moved to Stockton. She loved her home and missed living with her son Stephen and her dog, Teddy. She lived the last two years of her life in Stockton, under the care of her two daughters. She loved receiving the many cards and phone calls from friends that kept in touch with her.