By Rochelle VanderHelm
For The Shafter Press

Trade Center is centerpiece of plan 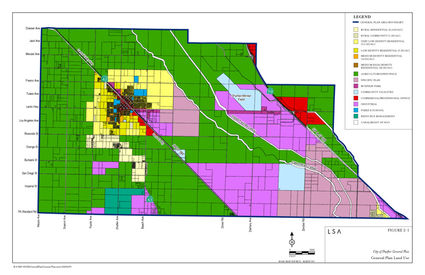 Map of the city's annexed areas from its Master Plan document.

In the 1990s, the City of Shafter annexed a large portion of land into the city limits just south of Seventh Standard Road. "Annexation 69" was completed in July of 1997, and it laid the groundwork for the industrial park that continues to grow today.

The International Trade and Transportation Center was the centerpiece of that expansion. They sought to maintain an inland port on the outskirts of Shafter, but eventually, the industrial park was sold to Paramount, now The Wonderful Company. The park is now maintained by that company.

When lands are annexed, the City of Shafter works with landowners to develop a functional plan for the land. Some needs to be set aside for transportation services, some for sewage, some for water and some for the fundamental purpose of the land, development.

"There was other land that was subdivided, some for the railroad," said City Manager Scott Hurlbert. A network of railroad tracks completed the final piece of the puzzle. That allowed for the transportation of goods into and out of the industrial park.

At the time of annexation, the state pushed cities to plan in a way that reduced the effect of emissions, especially from transportation, Hurlbert said. The planning that went into the industrial park reflects that goal.

Shafter is set up in a diamond configuration, with two primarily residential areas occupying opposite corners of the diamond, and two industrial centers the other opposite corners.

The industrial park on Santa Fe Way and the industrial area around Minter Field take up the southwest and northeast corners.

In 2006, Gossamer Grove, Heritage Ranch and Mission Lakes planned developments comprised Annexation #77 that made up Shafter's southerly residential zone, with the main City of Shafter forms the northern residential area.

Currently, there are large tracts of farmland that lie between these areas. However, with the City Council working with a forecast of a total population of around 20,000 people in the next official census, this land provides the growing space Shafter may one day need.

"There's a lot happening. Shafter, last year, was the fastest growing city in Kern County," said Hurlbert. Diamond-shaped zoning will help accommodate the effects of such growth by decreasing the distance -- and time -- commuters need to get to and from work.

Consider a town that is split in halves, residential and commercial. A new resident could find themselves with a house on one extreme edge of town, and a job at the other. This becomes even more likely for poorer households, with their housing distanced from the main workings of the town. The diamond configuration disperses more evenly the jobs and the housing, while also keeping them sufficiently separate.

The city benefits from annexations by gaining control of this zoning and city planning. The landowner benefits from the services the city can offer.

Some landowners choose to annex into city limits for better policing services, and more reliable water and sewage. And some areas, such as the Bishop Acres community across from the industrial park on Santa Fe Way, benefit from some of these services even before annexation.

The Local Agency Formation Commission, or LAFCO, is responsible for approving annexation throughout Kern County. The commission is made up of local government officials and prominent community members, and is tasked with easing the passage of lands and communities into each city.

"Anything with the name 'city' or 'district' need to go through LAFCO," said Hurlbert. In the case of developed land, LAFCO coordinates what policies, such as taxes and building codes, will be "grandfathered" in and what changes will be made.

The amounts and types of development, in the case of undeveloped land, are all planned ahead during the annexation process. This gives the city the advantage of developing the city in the most efficient way.

It also gives the landowner the advantage of knowing ahead of time what development is preferred and will be allowed by the city, while also benefiting from the other services provided by the city.

The City of Shafter anticipates much from the Santa Fe Way industrial park that was annexed in 1997. According to Hurlbert, it currently employs up to 5,000 people. "If the park was developed to its full potential, I think we could see more than 20,000 jobs in the future," said Hurlbert.