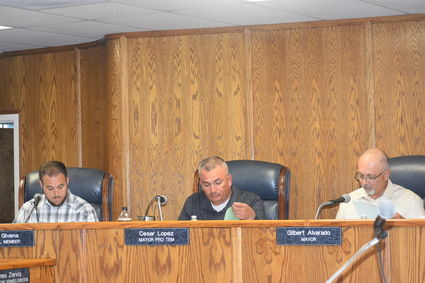 After four people urged them to revisit the issue at Tuesday's meeting, the City Council agreed to take another look at the placement of another plaque at the new Veterans Memorial.

The council had decided on June 18 that a plaque would be added to the Veterans Park Veterans Memorial, which would contain the City Council members names and titles on it. This plaque would be placed by the other memorial plaques at the flower bed of the memorial.

Former council member Woody Colvard was among those who encouraged a reversal. "I don't see any reason that the City Council members' names and titles would belong out there," he said.

"I agree with Woody, this is not the place for a plaque with the Council members names on it." Eli Espericueta, a U.S. Army veteran, said. He said he understood that it was a legacy thing, something to show their grandchildren, but he said that there are other places to put something like that other than a memorial honoring veterans.

The issue got mixed into other subjects during the public comments: "You guys also are going to look at the charter that has served the city well over the years. After reading the management reports, it seems that a lot of this has started with Mayor Alvarado and went from there," Espericueta said. "To get back to what I was saying, I think that this issue should be revisited."

Fred Thomas added that he is also a veteran and was very troubled by the council's decision to add their names and titles to the monument. "This memorial is honoring veterans. I am a veteran, but I would not want my name on the memorial. I would be ashamed to add my name to a memorial honoring all veterans."

Mike Miller, of AmVets, added to the criticism. "I have the same concern as the rest of the speakers here. There were several planning meetings, and this issue never came up. We decided not to add individual names to the memorial because it is for all veterans.

"The idea of the City Council putting their names at the memorial never came up."

Councilmembers Chad Givens, Cathy Prout and Manuel Garcia agreed, and the issue is to be on the agenda at the council's next meeting.

Mayor Alvarado thanked the veterans for their service. "Before we close public comment, I want to thank you for serving our country," he said.

But that wasn't the end of it.

The issue came up later, too. During the reports and comments section, Councilmember Garcia addressed the meeting, "We are going to revisit the issue," he said. He then tearfully added, "We didn't mean to offend anyone. If we did offend anybody, I apologize. Also, as for the charter, I am not looking to change the charter. I am only wanting to better understand it. I am not looking to change it," referring to a review authorized by the council last month.

In other council action, the members approved the $325,000 purchase of two new electric vehicles that will be used for Dial a Ride.

Administrative Services Director Jim Zervis said that they were going with Phoenix vehicles this time because they have had trouble with their current provider, Zenith. "There are two of our vehicles that we have had continuous trouble with. There are mechanical issues, and the vehicles are off the streets for a significant amount of time. I researched customers of the Phoenix company and found them to be very reliable. One company in Los Angeles has 50 of the vehicles that service LAX airport, operating 24/7, and they are very happy with the vehicles and the company."

The council also approved a $50,000 expense for a professional services contract for surveying services to be done at the North Shafter Street Improvement Project. The survey will provide a better understanding of is needed. In earlier council meetings, the need for improvements to the roads, shoulders, curbs and other infrasture in the area were discussed, with an emphasis on improving safety for local residents.