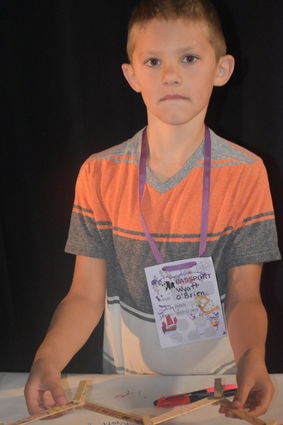 Wyatt O'Brien finished his snake made from popsicle sticks.

Shafter's Ford Theater was the site of a Community Vacation Bible School that drew almost 100 children this week. The theme is "The Incredible Race" and the kids had a chance to participate in a big race to the finish as well as learn about the other big race, the human race.

The event was for kindergarten through sixth grade, with each age group having a team leader that would take them from station to station. Several different stations were at the theater, from music, Bible story time, arts and crafts, and games. The event was a community event, with five churches creating one big VBS. Valley Bible Church, Shafter Christian Felllowship, Home Fellowship, La Rosa De Saron Church and New Hope Church joined together for this community event.

"There were five churches that came together for the event, but we had volunteers from other churches too who came to help out," said Colleen Diltz, a volunteer from Shafter Christian Fellowship.

The kids traveled from continent to continent in the race as they uncovered clues and attempted challenges to add to their scorecards. This was a global scavenger hunt as the race started at the Garden of Eden and went up to and through the time of the building of the Tower of Babel.

Kids were shown how the events that happened in the Bible still matter.

On Tuesday, the children made snakes out of popsicle sticks, decorating them in bright colors as they learned about the lesson given in the Garden of Eden.

Karen Reiker told the story of the Tower of Babel during Bible Story time, teaching the kids about the villagers being confused as their languages were turned into something different that they didn't recognize. 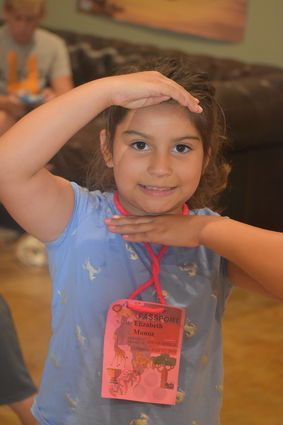 The children played a big game of that schoolyard favorite, dodgeball, as they tried to avoid getting hit by one of the global-shaped balls of different sizes.

Refreshments were served to keep their energy up as they navigated through all of the different stations.

At the end of the day, the kids gathered in the theater's main room for a time of fun challenges and music with choreography to go with it.

In addition to the incredible race that the kids were on, they also learned about the human race. The teachers and volunteers, which numbered 36, taught the kids that no matter where you live, what shade of skin you have, or what language you speak, everyone is part of the human race. They also learned from their teachers that all of God's people were called, from every tribe and nation, to spread the good news of Jesus Christ and His loving kindness.