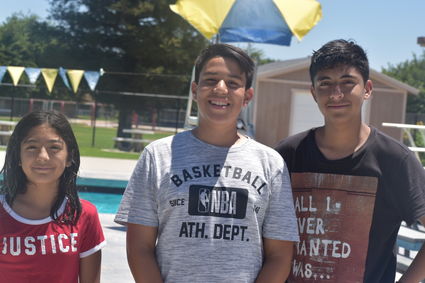 Aaliyah Estrada, Alex Aguirre and Dominic Cervacio are enjoying their time at camp.

The Shafter Recreation and Parks District is holding its second annual Summer Day Camp for local kids up to eighth grade.

According to Camp Director Elia Torres, last year they did not have a place for pre-school children at the camp. But a number of the parents who utilized the camp had younger children, so they decided to add a pre-school division to the camp this year. They have 10 3- and 4-year-olds this year. The preschoolers are kept busy doing arts and crafts, helping them with numbers and colors, and games. Torres said, "If you are familiar at all with the After School CHAMPS program, we have modeled our camp after that program, offering a lot of the same classes and activities."

The day camp accommodates children from kindergarten through eighth grade. This year, their attendance is up, with 112 children, up from 92 last year. "We grew by 20 kids this year, and hopefully it will keep getting bigger and better," she said.

The camp runs from 7:30 a.m. to 5:30 p.m. Torres said that sometimes she arrives earlier than that because they have a few parents that have to go to work earlier. "We try to accommodate our parents and help the kids have a safe and fun time at the camp," Torres said.

The day is broken up into different sessions, with a variety of activities to choose from. In the morning, the camp offers soccer, art and mixed media.

It's no surprise that one of the most popular activities on these hot summer days is swimming. Campers swim from noon to 1 p.m. According to Aaliyah Estrada, 10, swimming is her favorite activity. "I also like the juggling class," said Estrada. "I had never tried to juggle before, but I am getting the hang of it. It is a lot of fun."

The camp also offers a Legos class. If you thought this was just a class where you grab some Legos and snap them together, think again. Here, campers build a vehicle of their choice with the plastic parts. They then program the vehicle with an iPad to move. "The Legos Engineering class is awesome. I really like programming the cars to move," said Alex Aguirre, 12. "I also love the basketball class." 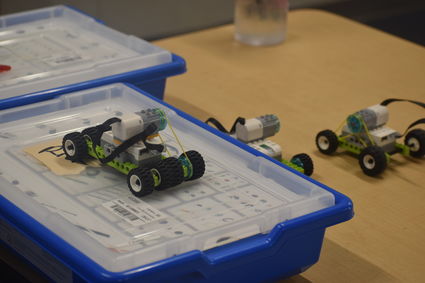 Campers made these Lego vehicles and programmed them with an iPad to move.

Classes also include cross stitch, pipe cleaners (where the kids create their own animals), bracelet making, drawing, puppet making, and flags. Brandi Root is teaching the kids how to perform with a big flag, preparing the children for junior high, where they can join the Flag Corps team that marches in parades and at sporting events.

"Yeah, she is helping our kids prepare for junior high, so when they enter the seventh and eighth grades, they will already have some basic skills to build on," Torres said.

Breakfast and lunch are provided for the campers, which is included in their fee. There are eighth graders who are enjoying the camp, along with the large number of younger kids. Dominick Cervacio, 13, said that the camp has been a lot of fun. His favorite part of the camp is basketball, followed by soccer and juggling. "Juggling has been hard for me because I have never done it before, but I really like it," Dominick said