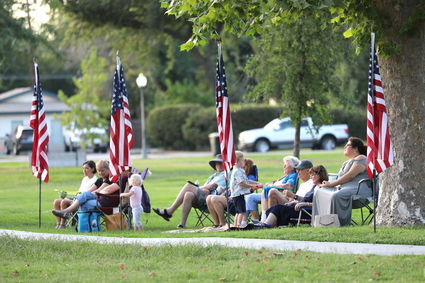 Concertgoers were treated to some music and a show of red, white and blue.

The Shafter Community Band put on a free concert in Mannel Park on Sunday evening, drawing a crowd to listen to a variety of marches performed by the local musicians.

With the gazebo and walkways dotted with American flags, the site was awash in red, white and blue. Fittingly, the All-American sounds of John Phillip Souza rang out as the flags flapped in the light breeze, waving to the beat of the music.

There were several composers on the playlist in addition to the "March King" Souza. Edwin Bagley, Meredith Wilson, Charles Zimmerman and others had their music on display. 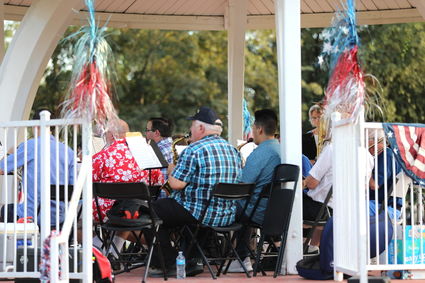 The Shafter Community Band performed a series of marches.

The Shafter Woman's Club provided free cookies, water and lemonade for the concertgoers. The attendees arrived with their lawn chairs, blankets -- some with their own awnings -- ready for a musical night. As the sun was going down, the park was filled with a patriotic vibe as the band showcasing their talents.

The Shafter Community Band is made up of local musicians who had rehearsed for the last few weeks at the Shafter Congregational Church, led by conductor Stephen Penner. Penner is also the conductor for the Shafter Symphony Orchestra, which gave several performances during the Shafter Colours Festival as well as performing for local schools, giving a lot of students their first taste of orchestral music. The Community Band plays at different events throughout the year, displaying what kind of talent exists in our community.

Some of the local musicians included, in addition to Penner, Randy Toews, Wendy Wilson, Ben Wilson, Kelly Bergen and Gary Ingle, among others.