Kids get up close with reptiles 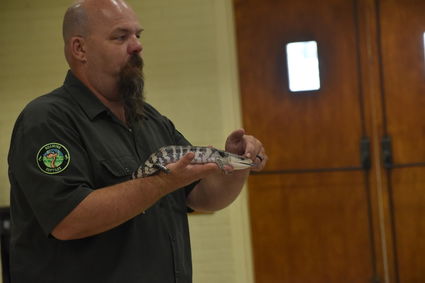 Brandon Fowler shows the audience why this lizard is called the Blue Tongued Skink.

The Shafter Branch of the Kern County Library hosted Brandon Fowler and his friends from Roaming Reptiles on Tuesday at the Shafter Veterans Hall. The reptile show was such a hit last year that this year, they moved the show from the library to the Vets Hall.

Almost 100 kids, of the young and old variety, were on hand to meet a number of creepy crawlies in person. Roaming Reptiles has been entertaining schools, clubs, birthday parties, and other events for years, showing the public that reptiles are not the scary and foreboding creatures that they are portrayed to be in movies and on television.

Fowler explained to the kids how important the different species are to nature, such as certain kinds of snakes taking care of rodent problems, and other species helping to control insect problems. These creatures were on display for the kids, parents and friends to look at and let them learn more about their different habitats, diets, personalities and purposes.

One of the main attractions of the show was an amazing red-tailed boa. Fowler said that it was one of his favorite friends, not only because she is a beautiful specimen, but also because of how he got her.

A family had left the snake in their attic in a pillowcase when they moved from the house. The snake lived up there for nine months, until the builder went in to do some work on their purchase. They found the snake and Fowler was contacted to see if he would take her. When Fowler took possession of her, Fowler said, "You could see her ribs, she was so thin. It was a very sad situation. When you have a pet, it becomes part of your family, and it should be treated like one."

Fowler nursed the snake back to health and today she is plump, healthy and one of the most popular stars of the show.

In addition to the boa, Fowler had a number of other snakes, including a California king snake and a milk snake. Milk snakes, Fowler said, are very tame and docile, and make excellent pets. "If your child is wanting to own a snake and you have never dealt with them before, the milk snake is their perfect snake for a first-time snake owner. They are very tame, like to be held, eat good and have wonderful personalities."

The audience got the opportunity to hold some of the animals, with the kids and adults alike delighted with the feel of the animals' skin as they held them. "I got to hold one of the lizards, and it was awesome," said Mariah, who didn't like them before today. "I used to be scared of them, but they are really cute and not scary at all."

The star of the show was a large black tegu from Argentina named Midnight. She seemed to love all of the attention, and took in all of the love as one by one, the attendees took their turn holding and touching her. There was one drawback to the show this year, compared to years passed. Fowler said that in the library shows, attendees are no longer able to handle or touch the snakes. "Once you get lawyers involved, they usually screw things up," commented Fowler. 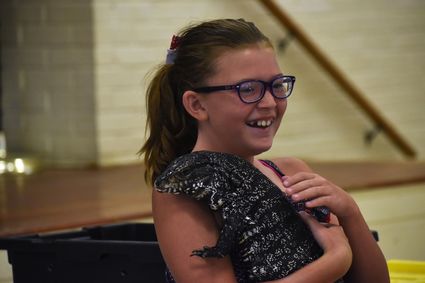 Savannah Young enjoyed holding the star of the show, Midnight.

He said that he really loved having the kids touch and handle the snakes, especially because of the negative way they are portrayed in media and society. "The opportunity to hold and touch them lets the kids see that they are not scary, fearsome creatures. It really changes the way that they perceive the animals." He said that maybe if enough parents and community members speak out, they might change the policy and let them be held and handled again during the shows.

Fowler said that this was the last show he would present personally in Shafter, and he had one last show in Wasco on Wednesday before heading out to the Midwest. Fowler will be in charge of the Roaming Reptiles organization back there, leaving a legacy of great entertainment and valuable lessons for his replacement to follow.