Congressman pays Visit to The Press 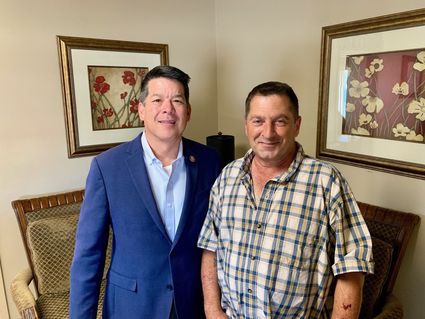 Cox said that Congress is out of session this week, so he decided to go on a small media tour, visiting a variety of local media outlets, connecting with the constituents and giving us a chance to ask questions and voice concerns about issues that affect our Valley.

Cox said that a major development in Congress this past session was progress in the issue of water, which affects the majority of the Central Valley. Cox, who is on the National Resources Committee, said that progress was made when he invited the chairman of the committee, Raul M. Grijalva, to visit the 21st District. Giving Grijalva a chance to see firsthand the challenges helped him see the need for an increased investment in water storage in the Central Valley – both surface and subsurface – to deliver water for farmers and clean drinking water for working-class families. Cox and Grijalva visited local communities and heard from farmers, water districts, and community advocacy groups. They also toured the Friant-Kern Canal.

When asked about the immigration issue, Cox said he believes something has to be done to get an immigration reform created, which he said is closer with ongoing negotiations between the parties. Cox said, "I think that everyone here should be here legally, and we need to get that done without breaking families apart or diminishing our workforce." Cox said that hard-working families should not have to live in fear of being torn apart and are valued for their contributions to our economy and communities. He said that we need an immigration system that actually works. Cox said that he will work for commonsense immigration reform that includes a path to citizenship and protection for DACA recipients.

Cox has also worked to get funding for community health clinics across the Central Valley. His efforts have resulted in health care access in rural areas so that hard-working families can see doctors and dentists in their own communities.

"I am concerned with the needs of my constituents and have enjoyed this time to connect with those who I am serving. I want everyone to know that they are who I am working for and I value the opinions and concerns of all those in the district."

Cox recently held a Town Hall meeting in Delano and is planning the next one in Mendota, a community in the northern part of the 21st District. He also said that residents do not have to wait for a Town Hall meeting to voice concerns. "We have mobile office hours in several locations, including the Wasco Library, where residents can get assistance in having their concerns heard and addressed," he said, suggesting they contact Joseph Lopez at the Bakersfield office at 661-864-7736 or the Selma office at 559-460-6070.

Cox said that he has worked hard to represent his entire district. "I met a gentleman the other day and he said, 'Mr. Cox, I want you to know that I did not vote for you, but I think you are doing a very good job.'

"That means a lot to me – knowing that I am making a difference for everyone in the district."

Congress is on a late summer break and will reconvene in the first week in September.