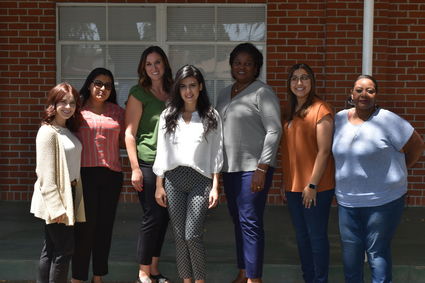 Shipley with some of the newcomers at SHS.

The Shafter Kiwanis Club held their annual New Teachers Luncheon last Friday, welcoming them to Shafter with a lunch of tri-tip, pasta, salad, and an array of desserts. This tradition has been going on for decades. Organizer Arlie Smith didn't know how many years it has been in existence, but said, "I know that I was a guest here 47 years ago, starting my first year of teaching in the Richland School District."

There were not as many new incoming teachers this year; some years have seen over seven or eight teachers introduced from each school. According to Prout, this can be a good thing, displaying the low turnover there is in the current school systems.

Ben Wilson led the attendees in the traditional opening song for the Kiwanis meetings, "My Country 'Tis of Thee," followed by the Pledge of Allegiance and the Invocation.

The guests of honor – new teachers – are always invited to dine first, followed by community members, then Kiwanis members.

There were also two new additions to Sequoia Elementary School. Principal Frank Flores introduced Britney Mejia and Sowamwenghe Oragwam, who are both going to be in the Special Education department.

Romero introduced four new teachers and an administrator added to the Trojan ranks. Jennifer Kirkland will be teaching in the English/Language Arts department and Monica Palafox will be teaching Mathematics. Romero said they are also welcoming a new psychologist intern, Daniela Mora, who will be working with the entire Richland School District. Kate Unfried will be teaching History/Social Science, working her way up from starting out as an instructional aide. Romero then introduced new Assistant Principal Justin Sargent.

Before Russell Shipley, principal of Shafter High School, introduced his new additions, some remarks were given by Kern High School Superintendent Bryan Schaefer. Schaefer, proudly wearing a Shafter General polo shirt, said that he was a proud General for the day. Schaefer then told the crowd that, just five years ago, he was in the same place promising Shafter someone new that would lead SHS proudly. He then pointed to Shipley and said, "I think I did just that," which brought a big round of applause. Shipley then introduced the new additions to Shafter High, followed by an announcement that had been anticipated for a while: Construction will begin on a multimillion-dollar stadium in 2020. 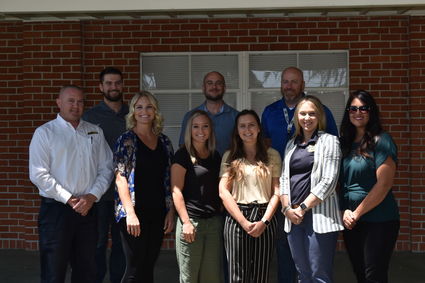 Richland School District had a total of 10 new teachers.

Shipley then welcomed eight new teachers to the General family. Kevin Morrison will be teaching in the Social Studies department and Victoria Polhamus will be teaching Spanish. Three additions to the Special Education department are Andrew Alderete, Kaitlyn Lackey, and Nicole Anderson. In the Mathematics department, there are two new teachers, Zachary Clayton and George Portillo. Angelica Martinez will be joining the English department.

Shipley said that wonderful things are happening at Shafter High and the search for teachers has been a lot easier in a way, but more challenging in another. "There is a big pool of candidates that consider Shafter a desirable destination, so the pool is big, but that also means that it is more challenging to select the most suitable one – which I think is a great problem to have."