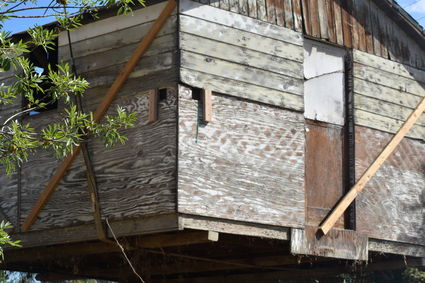 The wooden house is lifted onto the flatbed truck for its journey to the Kern County Museum.

A piece of Shafter history was moved to the Kern County Museum recently when one of the last original North Shafter Farm Labor Camp houses was picked up by Museum Director Mike McCoy, with the help of TNT Crane Services.

The house, owned by Susan Grisham, has been sitting in her backyard in Shafter since the labor camp was remodeled in 1968. At the time of the remodeling, the camp houses were sold for $25 each and moved to make room for larger, more modernized homes. The new homes were fitted with more comfortable, larger features.

According to McCoy, about 3 million people migrated to the area in the 1930s in search of a new and better life, most coming from Oklahoma and Arkansas. The camp was a result of the Federal Resettlement Administration and the Farm Security Administration establishing organized migratory labor camps to house destitute migrants. The federal camps were a great improvement over the ditch bank settlements that dotted the West in the 1930s. The camps had permanent buildings, running water, medical buildings, and even schools. 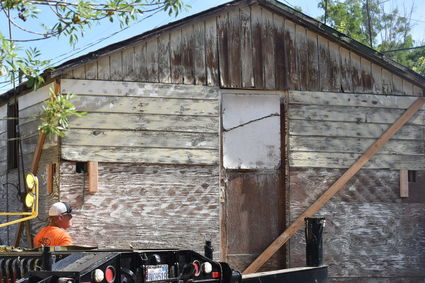 The house is in good shape, considering it was built back in the 1930s.

This particular house, which was moved on Wednesday, July 31, had been in the backyard of the Roland Grisham family home in Shafter since 1968. The family used the house as storage for seasonal items. Whenever an item was needed or could not be found, the family would say, "Check the little house!"

Susan Grisham, who still resides in the family home, donated the house to the Kern County Museum after the Shafter Museum was unable to raise funds to move the house and declined her offer of the house. The house will reside next to another original farm labor house from the Sunset Labor Camp in Arvin.

Although the house is in pretty good shape, it will be rehabilitated and restored to as near-original condition as possible. Once it is restored, the two houses will be dedicated and opened for public display at the Kern County Museum in early October.